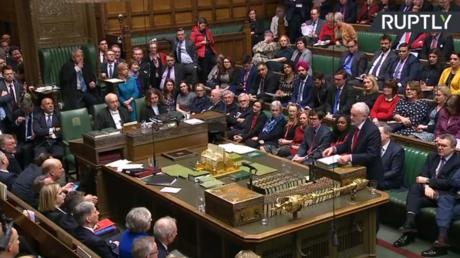 The UK government led by Theresa May, has survived to fight another day, after winning a no-confidence vote, tabled by Jeremy Corbyn’s Labour Party, following parliament rejecting the PM’s Brexit deal, earlier on Tuesday evening.

The no-confidence vote was defeated by 19 votes – the government winning by 325 to 306. It’s a rare positive note for May’s Tory cabinet after the humiliating Brexit defeat.

Speaking immediately after the vote, a victorious May said she was “pleased” that the House expressed its confidence in her government. May said she will “continue to work” to deliver on the result of the Brexit referendum and leave the EU.

May invited the leaders of parliamentary parties to meet with her individually, beginning on Wednesday evening.

Also on rt.com
Risk of ‘no deal’ Brexit has never been so high – EU negotiator Barnier


“I stand ready to work with any member of this House to deliver on Brexit,” she said.

Responding to the vote, Labour leader Jeremy Corbyn said that the House had “emphatically” rejected May’s deal on Tuesday. The government, he said, must now remove “clearly once and for all the prospect of the catastrophe of a no-deal Brexit from the EU and all the chaos that would result from that.”

Labour will now have to consider what move to make next. Their official Brexit policy, decided by members at conference in September, states that if a general election cannot be forced, then all options should be left on the table, including calling for a second referendum.