Theresa May says she’ll remain in power as prime minister “for the long term” and intends to lead the Conservatives into the next general election, despite her disastrous showing in the last one.

Speaking during a visit to Japan, May said she is not a “quitter” and that she would lead the Tories into the next vote in 2022.

But the voices in her own party are already ringing out, and there is a trail of evidence suggesting she could struggle to hold on.

Former party chairman Grant Shapps said that as May failed to win her party an absolute majority in June’s snap general election, she cannot just pledge to “go on and on” as Margaret Thatcher once did.

“The truth is we ran a very poor election. You can’t go pretending it wasn’t anything other than a disastrous result, of course it was, and you can’t jump straight from that to ‘I’ll go on forever,’” he told BBC Radio 4’s Today program.

Former Education Secretary Nicky Morgan, who is now chair of the Commons Treasury Committee, said: “One of the things that has been missing has been an attempt to reconcile the faultlines in the Conservative Party shown up by Europe.”

“I think it’s going to be difficult for Theresa May to lead us into the next general election … we have got to think about how we renew our franchise,” she added during an interview on the BBC’s Hard Talk program.

An editorial in London’s Evening Standard, which is edited by former Tory Chancellor George Osborne, also ripped into May’s suggestion she would lead her party into an election again.

The editorial said it forces Conservative MPs to face “the age-old dilemma: do you attempt a mutiny against a bad captain, and risk getting shot — or do you resign yourself to avoid going down with the ship?”

Tensions between the PM and EU officials suggest May herself could be a stumbling block in Brexit negotiations.

Concerns were heightened after it was reported that European Commission President Jean-Claude Juncker called German Chancellor Angela Merkel to say May’s approach to Brexit negotiations is “from a different galaxy.”

Brexit negotiator Guy Verhofstadt has said previously that May’s determination to stay on as PM would make Brexit negotiations even “more complex.”

Yet another own goal, after Cameron now May, will make already complex negotiations even more complicated.

After performing poorly in the last general election, the chances of May holding on to her post as PM appear remote.

Her decision to call a snap general election last June aimed at giving her more power in Brexit negotiations actually ended in her losing her party’s majority.

She was lucky to hold on to power then. 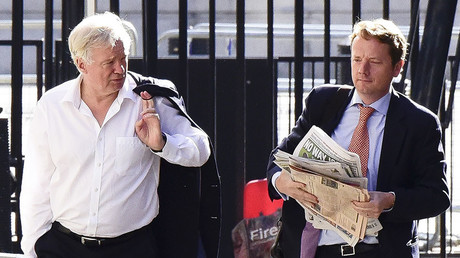 In fact, according to IPSOS Mori data published in July, May’s approval ratings plunged to -25 following the election, compared to Labour leader Jeremy Corbyn’s at -1.

A Tory party victory in 2022 is currently seen as the third most likely outcome according to bookmakers William Hill.  At 9/4 the Conservatives lag behind Labour at 5/4.  A hung parliament is the second most popular bet.

Former Conservative leader William Hague once wrote in the Telegraph: “Mrs May is known in government for going into things thoroughly.”

“But she is not known for changing her mind once she has made a decision. When she’s decided something, my advice is to accept that’s the end of it.”

Her constant claims of “strong and stable leadership” have not been reflected in the amount of times she has backtracked politically.

A month later, the PM “reluctantly” admitted an election was necessary to strengthen her party’s authority as Brexit unraveled.

She also had to reverse a Conservative manifesto policy by which anyone with assets worth more than £100,000 (US$128,000) would have to pay for social care.

The policy was greeted with widespread condemnation by the public, which branded it a “dementia tax” and May was forced to announce a cap on care payments.