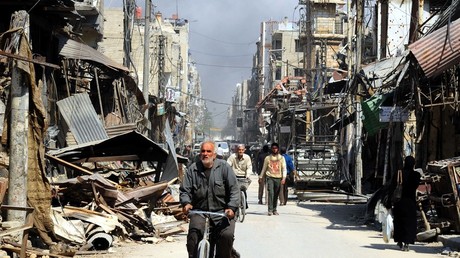 Speaking to RT’s Afshin Rattansi on Going Underground, renowned journalist and filmmaker John Pilger said nothing that the UK prime minister Theresa May says “is to be believed”

Commenting on the recent Anglo-American-French missile strikes against alleged Syrian chemical facilities, Pilger said the offensive was “built on a series of…lies, fabrications,” adding that May’s justifications for participation in the strikes shouldn’t be taken at face value.

“I don’t think anything she says is to be believed,”, he said.

Linking the government’s claims about the chemical attack in Douma, the ongoing investigation and reporting of the Salisbury poisoning, and the recent chemical attack in Syria, Pilger blasted the “pseudo-journalism” in the mainstream media as part of an overall “campaign against Russia.”

“I’ve never known a time when mainstream journalism has been so integrated into a propaganda barrage,” Pilger added.

“To simply write down and swallow what governments tell you is the antithesis of what ‘real journalism’ is. What we’re seeing is the most intense campaign of propaganda, at least since the build-up to the Iraq war in 2003.”