PM Theresa May knew that the official ‘Leave’ campaign had broken electoral law prior to triggering Article 50, her lawyer has revealed, after British expatriates living in the EU seek to challenge Brexit in the high court.

The admission came as Britons living in Spain, Italy and France are in the process of challenging the Brexit vote on the grounds that May invoked Article 50 in the knowledge that ‘Leave’ campaigns broke the law, by exceeding spending limits.

A decision from the High Court about whether the claim can proceed is expected within the next week. If permission is granted, a full hearing is likely to take place in October.

Sue Wilson, the lead claimant and chair of ‘Bremain in Spain,’ responding to the confession from May’s lawyer, said that she needed to be “held accountable” for setting in motion the UK’s exit from the EU knowing full well of electoral law had been broken by the ‘Leave’ campaign, reports The National.

“If the Prime minister was aware of the allegations of cheating during the referendum at the time she sent her letter giving notice for the UK to withdraw from the EU – as appears to be the case here – she needs to be held accountable,” Wilson said.

Wilson’s group argues that the behavior of the Brexit-backing campaigners should nullify the result. May’s lawyer contests that their argument is “unsustainable.”

In his submission to the court, which was released by the Brits abroad, Joseph Barrett of 11KBW chambers claimed that the issue of electoral law being possibly broken was already in the public domain. 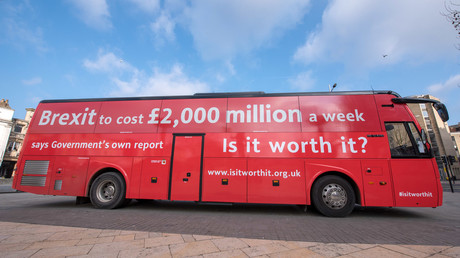 Barrett insisted: “At the time the decision to give Article 50 notice was taken, it was a matter of public record that campaigners may have breached campaign finance requirements, and other requirements, during the EU referendum campaign.

“The contention that the decision to give Article 50 notice was founded on the premise that there had been universal compliance with those requirements is therefore incorrect and unarguable.”

It comes as Tory Brexiteers such as prominent backbencher Jacob Rees-Mogg and former Brexit Minister Steve Baker, back a report by Economists for Free Trade (EFT) which claims leaving the EU without a deal, and trading on World Trade Organisation (WTO) terms, would be good for the UK.