Theresa May is “hanging by a thread” and businesses should prepare for Jeremy Corbyn to become Prime Minister, a leading City firm has said. CME Group, an American company, added that Labour taking power would be a “nightmare scenario” for the pound.

The financial market company, which has a major office in the City of London, issued the warnings as May tackles splits over Brexit negotiations and allegations of misconduct by top Tories. She has lost two Cabinet ministers within a month, and many believe Damian Green, the de facto deputy Prime Minister, will be next to fall.

CME’s executive director, Erik Norland, said since losing its parliamentary majority in June 2017, May’s Conservative Party has been “hanging by a thread, propped up by coalition partner, the Democratic Unionist Party of Northern Ireland,” according to The Telegraph. “Given the fragility of the current government, markets should probably be thinking carefully about the next Prime Minister and the potential impact on the UK economy and currency.”

He added: “The Labour Party has moved into a small but consistent polling lead since the June election. When new elections take place, they could easily produce a Labour majority or a hung parliament.”

The finance company’s warning, called ‘What to Expect from a Prime Minister Corbyn,’ is just one of many issued by FTSE 100 companies in recent months, it is understood.

CME Group is said to be increasingly concerned that the Labour leader’s socialist policies could wreak havoc on the economy. Around 150 firms will meet Labour frontbenchers this week to air their concerns, it is claimed. 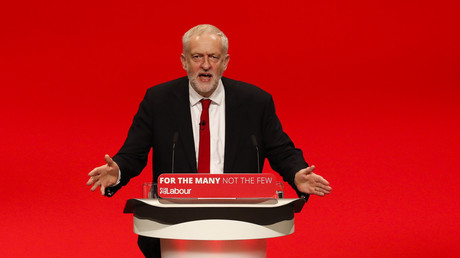 “Corbyn advocates increasing income taxes and authorising the Bank of England to directly finance infrastructure spending rather than buying bonds during quantitative easing and vastly expanding public spending,” Norland said. “In the event that the UK takes a ‘hard’ Brexit followed by a Labour victory, it could see Britain transform into a more socialist, centrally-controlled economy – just one that happens to be outside of the EU.

“This is the nightmare scenario for the pound. If events spiral beyond May’s control and the Brexit talks are further paralysed, this should intensify the downward pressure on the [pound] sterling.”

It comes after Morgan Stanley warned another election in the UK was highly probable because May would not win the kind of Brexit she wants. It also told investors that Corbyn would damage the valuation of UK companies by nationalizing key industries and ramping up taxes.

A report by the US bank’s European equity team said: “The UK is in the midst of a double whammy of uncertainty in the shape of Brexit and a fragile domestic political situation. Taken together, these two factors, which are interrelated to some degree, cast a long shadow over the policy backdrop and economic outlook of the UK. For the UK market, domestic politics may be perceived as a bigger risk than Brexit.”