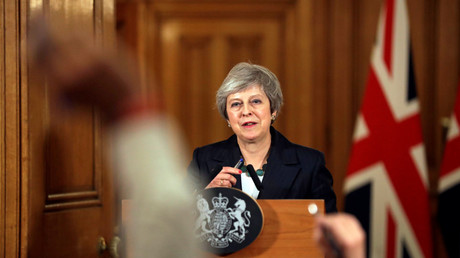 British Prime Minister Theresa May has warned of ‘consequences’ should she be ousted, in a defiant speech that follows a day of rebellion in her Conservative Party over the UK/EU divorce deal.

Faced with questions over her future May reiterated her commitment to seeing Brexit through.

READ MORE: End of May in November? ‘UK PM will be very lucky to get through the weekend’

Despite her confidence, it seems increasingly unlikely that May will get her deal through parliament as she faces opposition not only from Labour, but from Tory Brexiteers and her Democratic Unionist Party (DUP) allies.

While May acknowledged that some are “uncomfortable” with details about the Irish backstop, she stated that nobody has produced an alternative proposal that, would both, deliver on the referendum result and ensures no hard border between Northern Ireland and Republic of Ireland.

The beleaguered British leader has faced a day of resignations from her government –seven in total– and letters of no-confidence, though it remains unclear whether or not the number of letters has exceed the threshold of 48, the number needed to trigger a Tory party leadership contest.

The most prominent MP to declare his opposition to May was Jacob Rees-Mogg, the leader of the hard-Brexit Tory faction: the European Research Group (ERG).