If you are getting your news from mainstream media, whether it’s from supposedly “conservative,” “liberal,” or “objective” outlets, whether a corporate-owned or so-called “public” network, if you’re in the US, the UK, and many other countries, you are being lied to. How much they’re lying depends on what they’re reporting on. What you can be sure of, though, is if it’s something we really, really need to know the truth about right now — if a light needs to be shone on an urgent issue, like a possibly imminent invasion of a sovereign country by the US military — you can be sure that that’s when they’ll lie more, not less. When we need them the most, that’s when they’ll fail us most spectacularly.

It’s also at times like these that we see most starkly the difference between those of us with a solidly anti-imperialist understanding of reality, and so many of our supposedly progressive Congresspeople as well as so many of the ostensible beacons of freedom and democracy in Europe. When these Congresspeople and these European states are most needed to defend principles of national sovereignty, democracy, and international law, that’s exactly the moment when they will almost always side with the global, US and/or local corporate elite, and against a socialist movement, no matter how popular or democratic it may be. 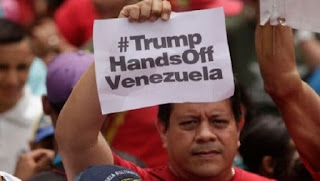 So, are all these journalists and all these Congresspeople and their European counterparts evil stooges of US…