The statement above is of course totally accurate for a country running budget and trade deficits for over half a century with a total debt, including unfunded liabilities, in the hundreds of trillions of dollars.

It could have been said today, but it actually dates back to August 1971 when the People’s Daily in China declared the beginning of the end for the monetary system of the capitalist world.

This prescient statement certainly has Cassandra characteristics. Cassandra was the princess of Troy who was given the gift to make prophecies that were true but no one believed. The Chinese government saw already 48 years ago that Nixon’s decision to end the gold backing of the dollar would be the end of the dollar and the Western monetary system. No one believed their prophecy at the time. But they are being proven right.

THE CHINESE PREDICTED THE DOLLAR FALL

Starting my working life in a Swiss Bank in Geneva two years before Nixon’s fatal decision, I have experience of that fall of the dollar that the Chinese predicted. In 1970, there were 4.30 Swiss francs to the dollar. Today you get just under one Franc for one US$. That is a catastrophic collapse of 77% of the world’s reserve currency in almost 50 years. If we look at the graph of the dollar against the Swiss franc below, we can see that this currency pair has been in a long consolidation at the bottom since 1987. 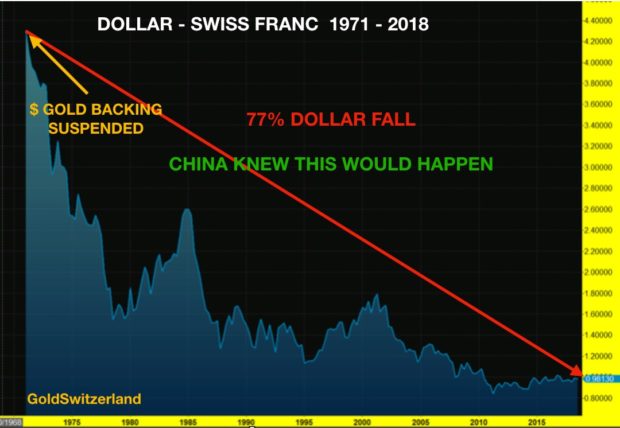 The next leg down in the dollar is not far away and the target over the next few years could be anywhere between 0.40 and 0.00 Swiss francs. This means a further fall of 60% to 100% could take place, making the dollar worthless. This confirms Voltaire’s statement that “all currencies eventually reach their intrinsic value of ZERO”. We know that this move…