Trump seems to have accomplished what political Hollywood never has – convincing thousands of Americans to flee the country. Driven by his policies, more US citizens sought asylum in Canada last year than have in decades.

Americans were the third-largest group to seek asylum in Canada in 2017, according to Immigration, Refugees and Citizenship Canada, their numbers only surpassed by Nigerians and Haitians. A total of 2,550 US citizens applied for Canadian asylum in 2017 – an eye-popping sixfold increase from the previous year, and more than at any other time in the last quarter-century.

Immigration experts claim most of the new arrivals are US-born children of Haitian parents hoping to avoid being separated from their families by Trump’s repeal of the Temporary Protected Status that was granted to 59,000 Haitians after 2010’s catastrophic earthquake. Haitians remaining in the US after July 2019 face deportation.

The Guardian humanized those numbers with the story of a family who, inspired by the uplifting tweets of Justin Trudeau, joined over 20,000 would-be refugees in crossing the border on foot at Quebec’s infamous Roxham Road, taking advantage of a now-popular loophole in the Safe Third Country Agreement between Canada and the US that normally forces refugees to apply for asylum in the first country in which they arrive.

To those fleeing persecution, terror & war, Canadians will welcome you, regardless of your faith. Diversity is our strength #WelcomeToCanada

Choosing one’s permanent home based on its leader’s tweets is unusual, to say the least, though it would certainly cut down on attempted immigration into the US if prospective migrants had to read through @realDonaldTrump’s musings. 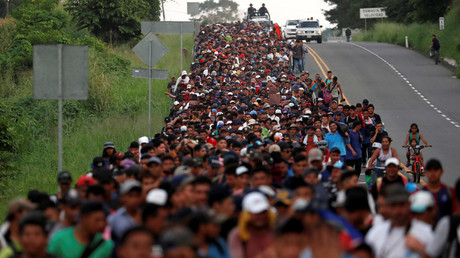 Trudeau has since backpedaled quite a bit on his arms-wide-open approach, partially because of the influx of migrants through Canada’s southern neighbor, most of whom are ineligible for asylum. Canadian public safety minister Ralph Goodale reminded aspiring migrants earlier this year that there is no “free ticket” into Canada, while the border agency wants to increase deportations of denied asylum claimants by 35 percent. Trudeau’s government has even sent officials to Haiti and Nigeria to tell wannabe immigrants to stay at home.

Perhaps he isn’t so different from Trump after all. The US president addressed the thousands of migrants currently streaming northward in caravans through Mexico, telling them they would not be allowed in unless they applied for entry through legal channels.

So many Americans considered the decision to flee north on election night 2016 that they actually crashed Canada’s Citizenship and Immigration website. Leading the charge were vocally anti-Trump celebrities like Lena Dunham and Barbra Streisand. While most stars who fail to follow through on their public ultimatums act like they never promised to leave, Streisand recently reminded the world of her broken promise during the midterms. “Do I want to move to Canada? I don’t know,” she said again, complaining to a New York Times reporter that Trump was making her fat. As for Dunham, she’s supposedly writing a screenplay about a Syrian refugee – no word yet on whether they end up in Canada.