The Times is conducting a fake news campaign in a bid to have RT shut down in Britain, former MP George Galloway says. His comments come as the Murdoch-owned newspaper published an article claiming RT “seized on the Grenfell Tower fire to try to foment ‘class war’ in Britain.”

In its article headlined “Russian TV wanted to stir class unrest after Grenfell,” the newspaper appears to have taken offense at RT calling Grenfell an “atrocity,” describing “mass killing at the Grenfell Tower amongst one of the poorest communities” and suggesting austerity was a factor in the disaster.

Speaking to RT, Galloway said: “The very idea that a disaster in which at least 71 poor people – men, women and children – were burned to death as a result of the failure of their landlord, the richest borough in England… the idea that British anger to this is the responsibility of RT and of the Russians is beyond offensive – it is obscene.”

The Times is conducting an “unremitting fake news campaign with the explicit purpose of having RT closed down in Britain,” Galloway added. “It is nothing more than a neo-con slander factory – and when you consider that the Times of London was until comparatively recently a respectable paper of record, now it has turned into nothing more than a tabloid slander sheet.”

Galloway, who lives and works in the borough where the Grenfell Tower tragedy unfolded, added: “[When residents] discovered that their anger is being attributed to President Putin, to Russia and RT as if they were not the people whose neighbors were burned to death, whose neighbors’ children no longer come to school because they are under the cold earth, the idea that this was all fomented by RT is as I say really quite obscene, pornographic in fact.” 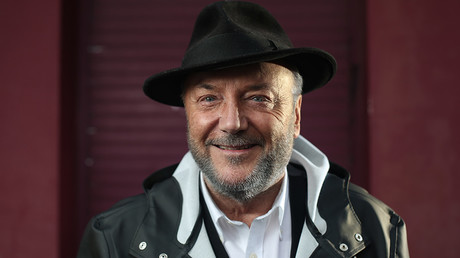 His comments come as the Equality and Human Rights Commission (EHRC) launched an inquiry into whether the state failed victims and their families. It is looking into whether the government and local council failed in their duty to protect life, prevent inhuman treatment and provide safe housing.

David Isaac, chair of the EHRC, said in a statement on Monday: “The Grenfell Tower fire has become a symbol of the inequality that exists in our country. The first duty of the state is to protect the lives of its citizens and lessons must be learnt to avoid this happening again. From the right to life to the duty to provide adequate housing, there are several areas where the state fell short in its duties to its citizens and these must be properly addressed.”

The Times has been vocal in its opposition to RT. In October, Galloway accused the newspaper of leading the charge to close down RT in Britain. “The Times is owned by a billionaire American citizen [Rupert Murdoch] who controls more than 40 percent of the British media market, and they’d like to keep it that way,” Galloway told RT. “The fact that RT is making great strides in attracting viewers and participants from all parts of the political spectrum is what is really getting under their skin.”