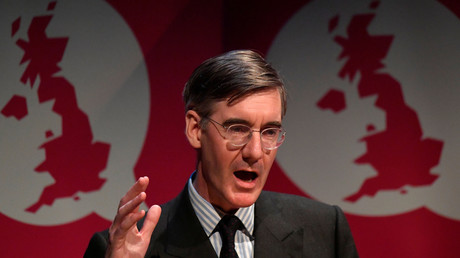 Hardline Tory Brexiteer Jacob Rees-Mogg has been attacked after calling Libya ‘the People’s Republic of Jam Jar or something,’ in a speech at the Conservative party conference in Birmingham.

Rees-Mogg, a prominent Brexiteer made the comments to a packed crowd at a fringe meeting of the party’s annual conference. In his speech he told those assembled that he thought the term “people’s vote,” something which pro-remainers in the Brexit debate have been calling for, sounded totalitarian.

He joked: “All the countries who are least interested in their people call themselves ‘people’s’, don’t they?

“So the People’s Republic of China? Oh, that’s communist.

“And the People’s Republic of…jam jar, or something like that, of Libya, was what it was called when Colonel Gaddafi was in charge.”

Rees-Mogg, who is urging Theresa May to ditch her Chequers Brexit plan, was referring to Great Socialist People’s Libyan Arab Jamahiriya, the official name given to Libya under the late Colonel Gaddafi. ‘Jamahiriya,’ the name Rees-Mogg mocked, loosely translates as “state of the masses.”

Can’t decide if the most disgusting thing about Britain is Coronation Chicken, or our ruling class’ habit of pretending they don’t know the names of countries we’ve bombed the shit out of. https://t.co/b6pUn99NB5

Right-wing Tory MP Jacob Rees-Mogg refers to an African country as “the people’s republic of jam jar or something.”

The country he was referring to is Libya – a country which was destroyed by his former Tory leader David Cameron in 2011 #CPC18pic.twitter.com/Z0ODuafPzG

The ex-Etonian was slammed on social media for his comments, with many accusing the Brexiteer of “casual racism”. Guardian journalist, Aditya Chakrabortty tweeted: “Ah, Global Britain: nothing to export but casual racism.” Alex Sobel, Labour and Cooperative MP, asked Rees-Mogg if he and Boris Johnson had the “same Geography teacher at Eton College?”

I think even those with a basic grasp of psychiatry know exactly why the words “jam jar” popped into Jacob Rees-Mogg’s head when searching for an African country reference.
Ugly underlying racism in the Tory Party is rife. pic.twitter.com/5pyaNEOZbv

Jacob Rees-Mogg casually dismisses Libya as “The People’s Republic of Jam Jar” because African places are funny if you are Jacob Rees-Mogg. Full of ignorant little people with funny names who can’t speak English. pic.twitter.com/hYUH5HoJWu

Lib Dem frontbencher Christine Jardine, stated Rees-Mogg was continuing in the tradition of offensive remarks which former foreign secretary Boris Johnson had been accused of committing on a regular basis.

Jardine told the Mirror: “This sort of remark is becoming too common from the Brexiteers, coming as it does in the wake of Boris’s recent burka jibes.

“Insulting other people is not the way I want my country represented and the public see it for what it is, petty politics.”

Rees-Mogg went on to claim in his speech that May’s Chequer’s deal was “the deadest of dead ducks in thunderstorms,” and insisted that neither the Conservative or Labour Party, or the EU would vote for the proposal.