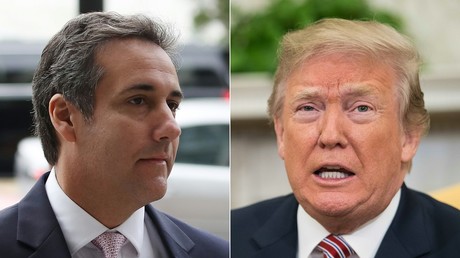 The Onion has joined in on the media feeding frenzy surrounding Donald Trump’s personal lawyer Michael Cohen, publishing an obtuse cease-and-desist letter that Cohen allegedly sent to the satirical site.

In a snarky piece published on Monday, The Onion revealed the contents of a strongly-worded e-mail sent to them by Cohen in January 2013. Objecting to a commentary piece satirically attributed to Trump, titled “When You’re Feeling Low, Just Remember I’ll Be Dead In About 15 Or 20 Years,” Cohen wrote to The Onion: “The article is an absolutely disgusting piece that lacks any place in journalism; even in your Onion,” adding that the obviously fake commentary “goes way beyond defamation.” Cohen also warned the website that he would take “all actions necessary to ensure your actions do not go without consequence” if the piece was not immediately removed.

The Onion employed some of its world-famous wisecracking in an article revealing the letter’s contents:

“Mr. Trump’s column, which was thoroughly vetted by our editors, simply endeavored to offer any of The Onion’s over 10 billion readers who had found themselves depressed about the state of the world a hopeful reminder that he would mentally and physically deteriorate and most likely die very soon,” the ‘news’ site insisted.

As for why the existence of Cohen’s bizarre cease-and-desist letter had been hidden from the public for so many years, the Onion explained: “Shortly [after publishing the piece], we apparently received an email from Mr. Cohen. Unfortunately, this email must have been improperly sorted by one of the Malaysian children who work in our mailroom, and was only discovered crumpled up under a pile of journalism awards in a remote corner of our offices last week.” The Onion continued: “We read the email, and given Mr. Trump’s ascension to the presidency since its writing, we want to apologize for the delay and would be delighted to meet with Mr. Cohen in person—at the White House, perhaps?”

The timing of the e-mails disclosure is curious – and Cohen appears to deny having sent it.

Responding to the Onion piece, Cohen tweeted out: Maybe all of you #haters #trolls missed the memo but @TheOnion is a news ‘SATIRE’ Organization. That means…it’s not real! #GetALife”

But the Onion insists that while its article is tongue-in-cheek, the email is very real.

After a producer for MSNBC admitted that he “legitimately could not tell” if the email was genuine or not, David Ford, the communications coordinator for The Onion, tweeted: “I can confirm the email itself is the real deal. From Michael Cohen to our press email address in 2013. The rest of the story is obviously in @TheOnion’s signature satirical voice.”

I can confirm the email itself is the real deal. From Michael Cohen to our press email address in 2013.

The rest of the story is obviously in @TheOnion‘s signature satirical voice… https://t.co/bix0OLB5nP

As further evidence of the authenticity of the e-mails, Cole Bolton, the former editor-in-chief of The Onion, claimed in May 2016 that Trump, the then-presumptive GOP presidential nominee, had previously threatened the website with legal action.