THE FIRST INSTALLMENT of Dr. Clyde N. Wilson’s SOUTHERN READER’S GUIDES distills more than a half century of scholarship into identifying and describing 50 essential books on the topic of the “Old South”— that is, the colonial and antebellum periods of Southern History.

Dr. Wilson, Emeritus Distinguished Professor of History of the University of South Carolina, was editor of the highly-praised Papers of John C. Calhoun and is the author or editor of more than 20 other books, and over 700 articles, essays, and reviews in a variety of books and journals, scholarly and popular. He is considered by many to be the greatest living historian of the South. If you want to understand the Old South as she understood herself, there is no greater guide than Dr. Wilson. 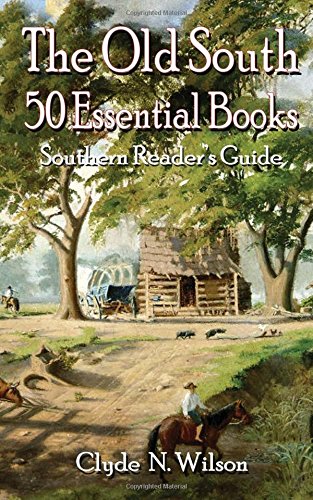 When I found out about this book I promptly bought it and was anxious to read it. As the preface notes, “The South is allowed to speak for itself through its own large, unique, and admirable writing. The South’s voice has nowhere been stronger and truer than its great creative writers, who are indeed a marvel of the world and perhaps the high point of American culture.”

The selections are mostly equally divided between history and literature. There are selections that cover the early South, the South in The Revolutionary War, events that led to the North-South conflict, people such as Daniel Boone, individual states and cities such as Texas and New Orleans, States’ Rights and lots more.

One name to look for is William Gilmore Simms.