The Russian ruble moved sharply this week as the global equity and commodities rout continues in the wake of the Federal Reserve raising interest rates.

Russia’s central bank over-reacted to a rise in inflation as the global economy moves towards a chaotic and politically dangerous 2019.

Oil prices are moving in sync with equities as the markets have entered a panic phase anticipating a global recession next year. Normally the Ruble is very strongly tied to oil prices. But as I showed in an article just before Thanksgiving, the ruble didn’t respond at all to a drop in Brent Crude from $80+ per barrel to around $60. 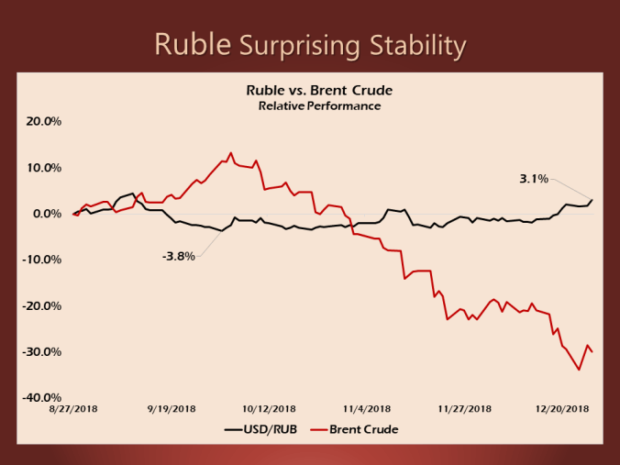 Amidst a 38% drop in the price of Brent Crude since October, the ruble has fluctuated in a 4% band around 67 to the dollar. This is shocking stability given the volatility in oil prices.

Ruble weakness from earlier this year was an over-reaction to heightened sanctions by the U.S. especially at a time where the threat of further sanctions on Iran and Venezuela’s collapse kept prices high.

And now it is catching up to this drop in oil prices with this week’s weakness. Oil prices are unsustainable above $65 per barrel amidst this level of supply.

They are equally unsustainable below $40 per barrel for just about everyone due to budget constraints (the Saudis) or debt-servicing (U.S. Frackers).

Since free-floating the ruble back in late 2014, Russia has been less and less affected by the fluctuations in oil prices. Because domestic costs are paid in rubles and income earned in dollars is offset by the weaker ruble.

It is government expenditures which suffer during waves of lower oil prices. But this year’s high prices have…