This document was submitted to the United Nations Human Rights Commission, Office of the Commissioner, based in Geneva, Switzerland in the name of Cuba solidarity organizations in the New York-New Jersey area of the United States. These are the political views and analysis of the author. 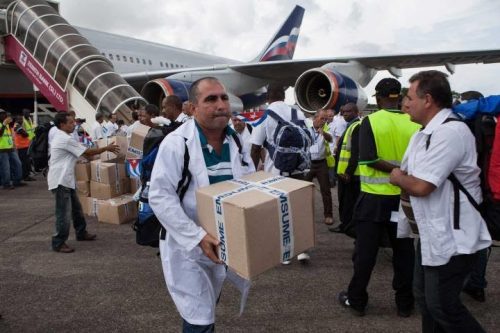 The first members of a team of 165 Cuban doctors and health workers unload boxes of medicines and medical material from a plane upon their arrival at Freetown’s airport to help the fight against Ebola in Sierra Leone, on October 2, 2014.  Florian Plaucheur—AFP/Getty Image

The purpose of this submission is not to draw up a list contrasting the false propaganda narrative on Cuba over human rights and democratic freedom, with the actual facts and reality of Cuba’s legal and criminal justice systems; its prisons; its media; the rights of free speech, assembly, and the organization of labor; Cuba’s actual electoral system and voting procedures; and the truth regarding mass political participation in decision-making on the island.  The facts on these realities would no doubt come as a surprise to those only exposed to the propaganda and half-truths of the US government and “Western” big-business commercial media.

With this submission I am rather more interested in the political framework that “human rights” becomes a cover and a false club for Washington’s anti-Cuba policies.