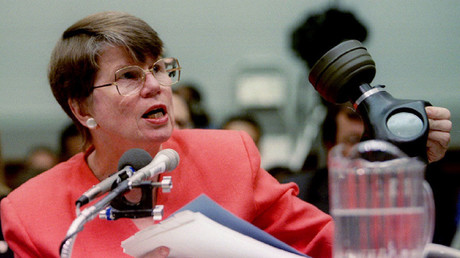 Former US Attorney General Janet Reno has died aged 78. Reno was renowned for several controversial decisions during her eight-year tenure under former President Bill Clinton, including the order that led to the Waco massacre.

Reno died early Monday from complications relating to Parkinson’s disease, according to her goddaughter Gabrielle D’Alemberte.

She became the first woman to hold the post of attorney general. Appointed in 1993 by President Bill Clinton, Reno gained notoriety after just 38 days in the job when she approved the disastrous FBI raid on the compound of the Branch Davidian cult in Waco, Texas.

The raid led to the deaths of around 80 people, including the sect’s leader, David Koresh.

The FBI made a surprise raid on the compound on February 28, 1993 and four agents and six sect members were killed in the resulting gunfire.

That raid led to a 51-day standoff which ended when Reno authorized the use of teargas to end the siege. A fire engulfed the Mount Carmel Center during the confrontation causing scores of deaths, including more than 20 children.

Reno later said the government had received allegations of child abuse inside the complex.

Reno took responsibility for the incident, telling news stations later that day: “I’m accountable. The buck stops with me.”

However, the attorney general defended her decision to allow the use of tear gas before a House Government Reform and Oversight panel in 1995, and blamed cult leader Koresh for the deaths.

“That was the hardest decision I ever had to make. I will live with it for the rest of my life,” she said. Reno was labeled the ‘Butcher of Waco’ by some following the massacre.

Known for her blunt manner, Reno was the longest serving AG of the 20th century despite being diagnosed with Parkinson’s Disease in 1995.

Other controversies in which she was involved and which implicated the Clinton administration include the Whitewater scandal, Filegate, and the investigation into Clinton’s sexual relationship with intern Monica Lewinksy. The latter saw Reno give the go ahead for Independent Counsel Kenneth Starr to expand his inquiry.

Reno faced a backlash in her hometown of Miami in 2000 when she authorized the armed seizure of 6-year-old Cuban shipwreck survivor Elian Gonzalez from his Miami relatives so he could be sent back to live with his father in Cuba. The raid angered Miami’s Cuban exile community who blasted her as a “witch” and lackey of Cuban President Fidel Castro.

Reno came under fire in 1999 amid allegations that China stole or illegally obtained US nuclear secrets over a 20-year period. Republicans called for her resignation over the Justice Department’s handling of the situation.

Reno’s career also saw the convictions of the 1995 Oklahoma City bombers and the Justice Department’s massive antitrust case against Microsoft. She returned to Florida after her term as AG ended and ran for governor in 2002, but lost in the Democratic primary.

Tributes have been pouring in for the lawyer from both the legal and political world including the current US Attorney General Loretta Lynch, who described Reno as an “inspiration” and a “trailblazer”.

Janet Reno was an inspiration & trailblazer for so many women in law enforcement & government — including me. She will be dearly missed.

When I think of Janet Reno, I think of a cabin in the woods, a red pick-up truck and Elian Gonzalez. She was controversial. She stood tall.

Janet Reno was an inspiration to many. We won’t forget her achievements as the first female Attorney General. Rest in peace.

In memory of Janet Reno, the words she spoke 1000 times when she weekly met with press: “I cannot comment on a pending investigation.”