When George H.W. Bush died on November 30th, America’s two self-proclaimed newspapers of record The Washington Post and The New York Times were both quick off the mark in publishing what appeared to be definitive obituaries of the former president and statesman that had clearly been prepared in advance. The obit by The Times and that by The Post differed little in substance but they had one curious omission, i.e. President G.H.W. Bush’s eighteen month confrontation with Israel and its powerful domestic lobby.

In 1991-1992 President Bush engaged in a series of sharp exchanges with Israel and its American lobby over the issue of $10 billion in loan guarantees to the Jewish state to pay for the resettlement of Russian Jews, who were beginning to arrive in both Israel and the West in large numbers. Bush correctly assumed that the loans would in fact also subsidize the expansions of illegal settlements on the West Bank and in Gaza, which the U.S. government opposed, so he said “no” to the loans. After a series of increasingly acrimonious exchanges back and forth, Bush, facing election, withdrew his objections and the loans were approved, but he was the only U.S. president since John F. Kennedy to confront the Israel Lobby in any serious way. Kennedy was, of course, assassinated and Bush was defeated for reelection. 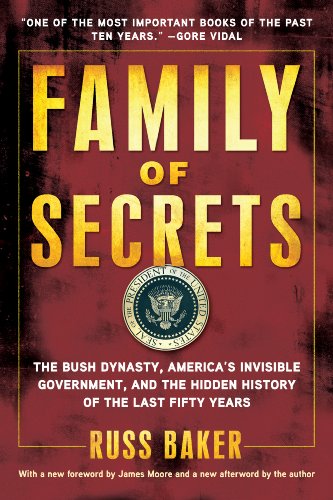 Family of Secrets: The…
Russ Baker
Check Amazon for Pricing.

Both G.H.W. Bush and many other observers of the campaign and election believed the loss to Bill Clinton in 1992 was at least in part attributable to the actions of Israel and its friends. The conflict between Bush and the Israeli government backed up by the Israel Lobby and a number of congressmen and media outlets began in the spring of 1991….