A police sergeant has been fired for ordering a rookie to use a taser on a woman who called 911 over a domestic dispute. The officer’s actions only “escalated the situation” instead of defusing it, the police chief said.

A 22-year-veteran, Sgt. Kenneth Pierce was placed on “indefinite suspension” from the Fort Worth Police Department after an internal review of the body cam video which captured the August arrest. A woman had called the police over a domestic dispute with her boyfriend, but she herself ended up being tased and arrested.

“We are built on a foundation of being problem-solvers. Pierce responded in an opposite manner, and he escalated the situation endangering everyone involved including his fellow officers,” Fort Worth police chief Joel Fitzgerald said in a statement.

The Department has released the footage of the incident along with the statement, saying it clearly shows the actions of Sgt. Pierce were “absolutely unacceptable.” The 12-minute long video from the bodycam worn by the female rookie officer, Maria Bayona, shows the entire incident – from the police arrival to the arrest of the woman.

When the officers arrived at the scene, they were greeted by a man and a woman in the hallway, who immediately notified them that they were not welcome there. Pierce proceeded to talk to the man, while Bayona went on to question the female African American woman as to what prompted the 911 disturbance call. 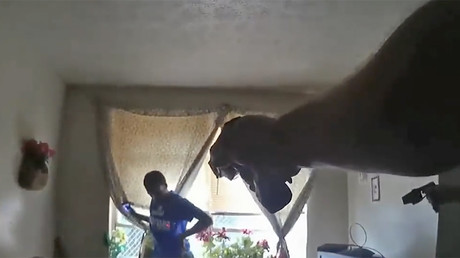 “Y’all going for the wrong people,” the woman’s boyfriend said, denying the couple had argued. The woman, meanwhile notified Bayona that she had a five-year-old child in the apartment, and that she has a knife in her purse. The officers went on to secure the bag and the weapon inside, and asked the woman if they could inspect the apartment to make sure the child was safe. The woman refused to allow the officers entry, and was also reluctant to show the officers her ID, while holding it in her hand.

“I don’t have to hand her anything,” the woman is heard saying in the video. “Turn around and hand her your ID or you’re going in handcuffs and going to jail,” Pierce warned. Moments later, Bayona grabbed the woman’s arm and attempted to handcuff her. Pierce rushed to help the rookie officer amid the screams of the victim, who kept on yelling, “let my hand go.”

After a few seconds of tussling, Pierce ordered his partner to tase the woman. The body cam footage then shows Bayona shooting the woman right in the stomach. The rookie officer then threatened to tase her again, as Pierce handcuffed her. Leading the arrested female out of the building into a police car, Bayona kept on repeating how she was “trying to be nice,” and that the woman’s attitude forced the officers to respond with a taser.

After reviewing the video, Fitzgerald announced that police have dropped Aggravated Assault and Resisting Arrest charges against the woman who was not identified by police.

“In my mind, all people should be treated with dignity and respect. That’s non-negotiable,” the chief said, noting that during the August incident, Pierce became “impatient, initiated an unnecessary physical confrontation, and then ordered a rookie police officer to ‘Tase’ the woman.”

The victim in the footage, identified by CBS local news as Dorshay, acknowledged she initiated the 911 call in August, adding, that her dealings with law enforcement on that day have made her very wary of the police. 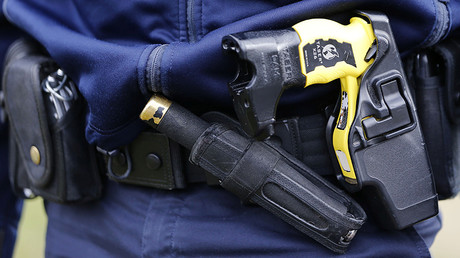 Dorshay claims that she was cooperating with the officers and willingly handed over her weapon that she kept in her purse for self defense. The victim said she protested the police ID request because she felt that she was being treated like a suspect.

“My child was in the house and if I go to jail who’s going to look after her,” she told CBS. “At that moment and time I just thought ‘I’m gonna fight them back, because I called y’all. How y’all gonna take me to jail?’ It [sic] doesn’t make sense… Just defense mode, I was thinking about my child.”

“They are making claims that Pierce escalated the situation, and I don’t see it that way,” Terry Daffron, attorney for the Combined Law Enforcement Association of Texas told the Star-Telegram. “I see that she was completely noncompliant with everything she was asked to do. He came in and was trying to help the rookie officer gain control to try to get her to comply.”