Texas police are investigating the motive behind a senseless act of violence in which a screaming man stabbed his 16-month-old toddler to death in public, despite an armed neighbor’s intervention to stop him.

The attacker was heard shouting gibberish before charging his kid with a knife in a common area of the Oak Forest Apartments on Sunday, Lewisville police department said after interviewing witnesses to the horrific incident.

“The information we have is that the suspect came out of the apartment carrying the child, and he was yelling some very loud, random things about religion and ‘Jesus is coming,’” police Captain Jesse Hunter said.

#FOX4News: Edwardo Carranza shot this video of the arrest of the man, Lewisville Police say, slammed, beat& stabbed to death his 16-month old son yesterday. They will identify him once he’s released from the hospital and booked into jail. pic.twitter.com/Hzpt0o1nwF

Moments later, the man placed his son on the ground and stabbed him multiple times with a small knife. One of the neighbors, who is yet to be identified, rushed to the child’s rescue, unloading three shots from his balcony. He managed to hit the attacker in his leg, “effectively ending the assault on the child,” Hunter said, noting that the tragedy was “probably the worst in my 20 years” in the police force. 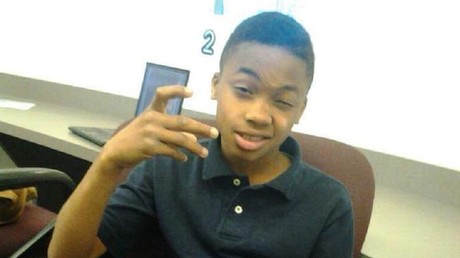 Both the man and the child were rushed to the hospital, where the boy soon succumbed to his injuries. The 27-year-old father, whose name has not yet been released, was arrested after receiving medical treatment. He was booked into Lewisville city jail Monday afternoon.

Authorities are yet to charge the assailant, pending his toxicology results. The police investigation remains ongoing.

Authorities are still trying to piece together the motive for the attack, which occurred while the child’s mother was at work. According to police, the family had no prior history with law enforcement or Child Protective Services. The person who opened fire to stop the attack will not face charges.