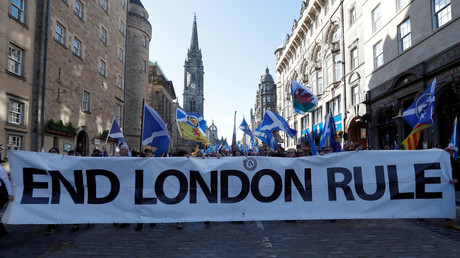 Edinburgh’s streets turned blue on Saturday as tens of thousands of Scots marched to demand independence. The high attendance is in defiance of London’s insistence that there is no “appetite” for independence in Scotland.

Marching under the slogan of ‘All Under One Banner,’ the campaign hopes to unite Scots of different political stripes to advocate for a second referendum on independence, after a 2014 vote went narrowly in favor of remaining part of the United Kingdom.

Estimates from the campaign suggest that at least 100,000 people have turned out to voice their support for a second vote on Scottish independence.

The weather too seemingly turned out in support of the marchers, with blue skies overhead matching that of the sea of Scottish flags below. Others waved flags in solidarity with the Catalonian independence movement, a united Ireland, and the EU.