A Tennessee hardware store owner reinstated his ‘No Gays Allowed’ sign following the Supreme Court Ruling which sided with a Christian baker who refused to make a wedding cake for a same-sex couple.

Jeff Amyx first posted the homophobic sign at the entrance to his Amyx Hardware & Roofing Supplies store in Grainger County three years ago, at the time in response to the Supreme Court legalizing same-sex marriage nationwide. 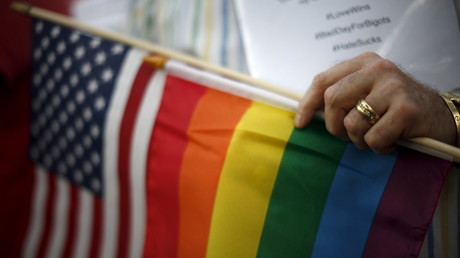 The discriminatory sign made headlines and the backlash led Amyx to remove the warning and replace it with a notice, reading: “We reserve the right to refuse service to anyone who would violate our rights of freedom of speech & freedom of religion.”

Following Monday’s ruling in favor of the Colorado baker who cited religious objection as his reason for refusing to bake a wedding cake for a same-sex couple, Amyx re-posted the sign that day.

Amyx said he was pleasantly “shocked” by the ruling and decided to repost the sign in celebration of the “win.”

“Christianity is under attack. This is a great win, don’t get me wrong, but this is not the end, this is just the beginning,” he told WBIR.

Colorado law prohibits discrimination on the basis of sexual orientation, however, the Supreme Court ruled 7-2 to find Jack Phillips’ rights were violated by the Colorado Civil Rights Commission under the First Amendment.

Legal experts have said the ruling is specific to the baker because the Colorado Civil Rights Commission showed hostility by suggesting his claims of religious freedom were made to justify discrimination. However, it doesn’t mean businesses can now refuse to serve gay and lesbian people.