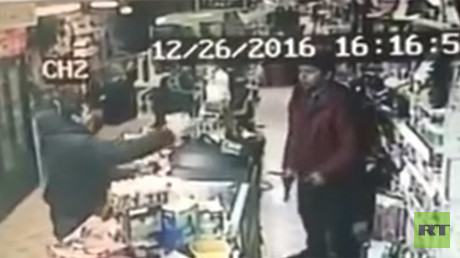 CCTV footage of an attempted robbery shows a teenage shop worker snatching a gun right out of a burglar’s hands and scaring him from the store.

The incident took place on Monday at the AC Convenience Store in Atlantic City, New Jersey. Shortly after 4pm local time, the robber entered the store wearing a mask and holding a gun in a bag.

He threatened the young clerk, who has been named as 17-year-old Efaj Ahmed, with the gun while demanding money from the cash register.

Quick-witted Ahmed swiftly snatched the gun and the bag right out of the man’s hands.

When he had the ‘weapon’ in his possession, he realized it was actually a BB gun.

The foiled robber then removed his mask and tried to pretend that he was playing a joke on Ahmed before fleeing the store.

Atlantic City police are asking for the public’s assistance in identifying the suspect, who they believe may work or reside in the area.

Attempting to identify this robbery suspect. If you know who he is call 347-5766 or text to 847411. Begin with ACPD. Texts are anonymous. pic.twitter.com/x8D8YQYC84