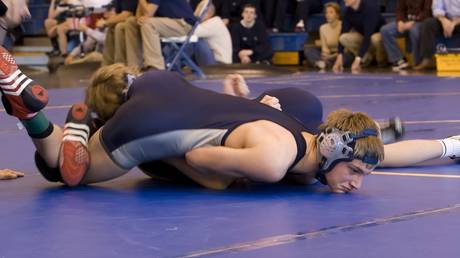 A high school wrestling match took a strange turn when a teenager crashed right through the gym roof above. The boy required six hours of surgery after his shocking 40-foot plunge, which was caught on camera.

The crazy scene unfolded during a wrestling tournament at Buchholz High School in Gainesville, Florida on Friday.

Sharyn Gonzalez was filming her son compete in one of the district matches when 19-year-old Chad Shanks fell through the ceiling and landed on a wrestling mat.

“We just started hearing some cracking sounds,” Gonzalez told News4Jax. “A couple people thought it sounded a little like gunshots. I didn’t think that, but all of a sudden you just see this boy fall from the ceiling through the skylight.”

Shanks suffered fractures to his back and had to have a six hour operation, his friends told News4Jax.

Six of the teens have been charged with second-degree misdemeanor trespassing on school grounds, and Shanks will be charged too. They were reportedly filming a music video on the roof of the gym when the teen fell.