RT guests have sparred over Donald Trump’s suggestion that teachers should carry firearms to protect their students from “maniacs.”  One called it an effective deterrent, while another said it would “militarize” schools.

Trump’s statement, which has certainly raised quite a few eyebrows, comes in the wake of the deadly Florida school shooting earlier this month.

However, allowing teachers to pack ‘heat’ is the “only solution that can reasonably protect every kid in America today,” John William Loudon, a former Republican member the Missouri Senate, told RT. “You can ban all the guns you want – you can ban every sale, every manufacturer – you’re not going to stop a single shooting … The best way to defend against a criminal with a gun is somebody who’s law-abiding with a gun.” 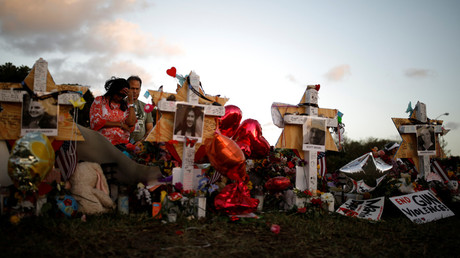 “What does education mean to us? If we want to militarize these areas, if we want to introduce weapons and encourage teachers to carry weapons – I think that’s absurd,” Bernal told RT. “For me and the majority of Americans, schools are a place of human development, and growth, and free thinking and critical thinking and not a place for weaponized suppression and fear and intimidation which happens from guns because that’s what they do – they kill.”

The two guests also locked horns over the role of America’s gun lobby. Bernal claimed that the National Rifle Association (NRA) has far too much power on Capitol Hill and doesn’t represent the views of most Americans, while Loudon dismissed the idea that the NRA was too powerful, arguing that the “power of the NRA is not in their campaign contributions, it’s the way they are reflecting the American people who value their liberties.”

Speaking with student survivors of the recent school shooting in Parkland, Florida, Trump proposed allowing teachers with special training to carry concealed firearms, because “A gun-free zone to a maniac – because they’re all cowards – a gun-free zone is ‘let’s go in and let’s attack, because bullets aren’t coming back at us.’”

The idea of armed school staff has been both applauded and condemned – highlighting a sharp divide among Americans on issues surrounding gun control and public safety.