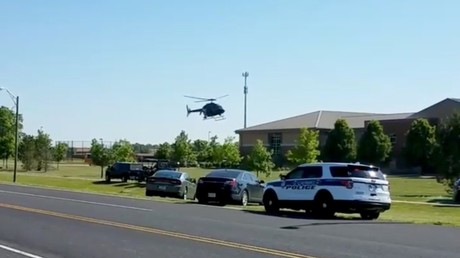 An Indiana middle school went into lockdown on Friday after a student opened fire, injuring a teacher and a fellow pupil.

Noblesville Police Department has confirmed that a teacher and child suffered gunshot wounds during an active shooter situation at West Middle School, near Morse Reservoir. The duo were taken to Noblesville Methodist Hospital, where their condition is unknown.

In a post on Twitter Indiana Police officer John Perrine said the suspect has since been taken into custody and the families of the victims have been notified.

Those families have been notified

All students are being taken to the Noblesville High School, parents are asked to pick up there#NoblesvilleWest

“All students are being taken to the Noblesville High School, parents are asked to pick up there,” Perrine tweeted. The person in police custody is a male student currently enrolled at the middle school.

Dr Beth Neidermeyer, Noblesville schools superintendent, said her heart goes out to the victims of the shooting. She said the quick response from teachers was important in getting people out of danger.

The incident comes a week after a gunman opened fire at Santa Fe High School in Texas, killing 10 students. The suspect in that shooting, Dimitrios Pagourtzis, a 17-year-old student at the school, is also alleged to have placed rudimentary bombs in the area.

In a press conference, Noblesville Chief of Police Kevin Jowitt reassured locals about the possibility of any further danger. However, he did say that a local high school was being monitored by police because of a recent ‘threat’ made against staff and pupils.

“The situation is contained. We have two victims – one an adult teacher and one a juvenile student –  who have been transported to hospital,” Jowitt said.

“There is a male student at Noblesville West Middle School who has been detained. We are aware of a secondary threat that has been made against Noblesville High School. We have multiple officers and a command post established at the high school and they are diligently ensuring the safety of the students and the staff.”