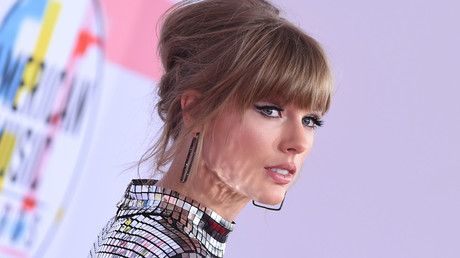 Swift allegedly hid the facial-recognition camera inside a kiosk displaying rehearsal clips at her May 18 show at the Rose Bowl stadium in Pasadena, California, according to Rolling Stone.

Pictures of fans’ faces were taken while they gazed at the screen before being reportedly sent to a “command post” in Nashville, where they were cross-referenced with a database of “hundreds” of the singer’s known stalkers.

“Everybody who went by would stop and stare at it, and the software would start working,” said Mike Downing, chief security officer of Oak View Group, an entertainment and sports facilities company for concert venues like Madison Square Garden and the Forum in Los Angeles, to the renowned music magazine.

While the methods may have been questionable combatting stalkers is hugely important for the hitmaker. Swift has accumulated so many ‘celebrity stalkers’ that they were the topic of an article in a recent issue of Psychology Today. The piece investigated the mindset of her many crazed ‘fans’, a number of whom have been arrested for stalking, breaking into her home or issuing rape and death threats.

Earlier this month one of the accused stalkers, 22-year-old Roger Albarado, was sentenced to six months in jail for breaking into her three-story Manhattan townhouse, using her shower and sleeping in her bed. Police discovered the ‘fan’ after they saw a ladder propped against the building. Swift was not home at the time.


Security fears and best intentions aside, the use of the technology has raised questions about the privacy rights of her fans and the overall legality of the operation. It’s not known who owns the images of concertgoers, where they have been stored or how long they can be kept on file.

About one in two American adults’ – more than 117 million people – identities are already in law enforcement face recognition databases, according to a 2016 study by Georgetown University. However there is little legal requirements for how the technology can be used.

Sarah St. Vincent, a researcher on US surveillance and advocate for Human Rights Watch, told Slate that people need to be made aware if such an invasive technology is being used – whether it’s to protect them or not.

“Companies have a responsibility to respect human rights, and they need to make sure any monitoring that they do is really limited to what is strictly necessary to achieve a legitimate aim,” St. Vincent said.

“If this company is learning that this person is attending a Taylor Swift concert and maybe stood next to certain other people or went to the bar to get a drink or engaged in other things, that’s data that’s valuable for them to sell.”

Facial recognition has been rampant in China for years and in May police arrested three wanted suspects at a Hong Kong concert where 60,000 people were in attendance after using the technology to scan the crowd, the WSJ reports.

Swift and her representatives have declined media requests for comment or confirmation of the report.