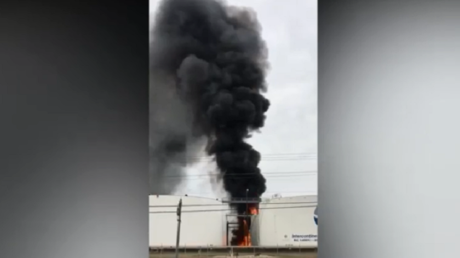 A petrochemical storage facility has caught fire in Deer Park, Texas, sending thick plumes of potentially hazardous smoke into the air. Locals have been called to seek shelter inside as firefighters struggle to contain the blaze.

The inferno has been ravaging one of the tanks of the Intercontinental Terminals Company (ITC), based in Deer Park, a city of some 32,000 in southeast Texas. Videos and photos shared on social media show a thick pillar of black smoke billowing from the facility into the air.

The ITC said that the fire broke out at 10:22 am local time, engulfing the tank that contains Naphtha, a highly flammable chemical which is a component of gasoline. The chemical is described as extremely volatile and is classified as carcinogenic.

In an update released some five hours after the first reports of fire, the ITC said that the chemical was still burning. It said that the facility was working with local first responders to try to contain the blaze and prevent it from jumping onto adjacent structures.

In the meantime, locals have been warned against going outside while the country officials, including those from the county HAZMAT division, assess if the air has been contaminated.

As the fire was sweeping through the facility on Sunday afternoon, the city authorities issued a “shelter in place” order for the whole Deer Park, calling on the residents to “seek shelter immediately.”

The order means that the residents are encouraged to stay in place out of fear of potentially dangerous substances being released into the atmosphere, and are advised to shut down windows, air ventilation and air conditions systems, as well as turn off fans and clothes dryers in precaution.


So far, pollution authorities have yet to discover any contaminants in the air that might pose danger to the residents, Harris County Pollution Control Deputy Director Latrice Babin told Chron, noting that the city was lucky since the wind appeared to be blowing upward.

At the time when the fire broke out, some 30 employees were at the facility. All have been brought to safety and no one is believed to have been injured.

The Dee Park terminal was built in 1972 and currently stores an array of flammable liquids and gases, as well as several types of oil and distillates in its 242 tanks. It has a capacity of 3.1 million barrels (2.2 million cbm), according to  the company’s website.

It is the second similar incident that has rocked the area in two days. On Saturday, a fire ripped through an ExxonMobil oil refinery in Baytown, just 11 miles from Deer Park. An investigation has been launched into the cause of the fire. No injuries have been reported there.