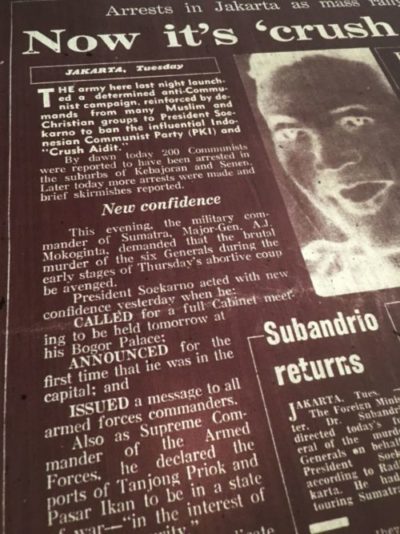 I’m sitting at the splendid building of the Singapore National Library, in a semi-dark room, microfilm inserted into a high-tech machine. I’m watching and then filming and photographing several old Malaysian newspapers dating back from October 1965.

These reports were published right after the horrible 1965 military coup in Indonesia, which basically overthrew the progressive President Sukarno and liquidated then the third largest Communist party on Earth, PKI (Partai Komunis Indonesia). Between one and three million Indonesian people lost their lives in some of the most horrifying massacres of the 20th century. From a socialist (and soon to be Communist) country, Indonesia descended into the present pits of turbo-capitalist, as well as religious and extreme right-wing gaga.

The United States, United Kingdom, Australia, Holland and several other Western nations, directly sponsored the coup, while directing both the pro-Western treasonous factions in the military, as well as the religious leaders who stood, from the start, at the forefront of the genocide.

All this information is, of course, widely available in the de-classified archives of both the CIA and U.S. State Department. It can be accessed, analyzed and reproduced. I personally made a film about the events, and so have several other directors.

But it isn’t part of the memory of humanity. In Southeast Asia, it is known only to a handful of intellectuals.