An ill ex-surgeon was marched off an easyJet flight by armed guards after a row over a seat turned sour. Dr Sam Ramsay Smith booked a seat with extra legroom due to a painful medical condition that has left him crippled.

The 72-year old suffers from erythromelalgia, a multiple-sclerosis-like disease that has left him badly debilitated and in need of a walking stick. The former NHS surgeon was traveling from Amsterdam to Gatwick Airport in the UK after treatment for his illness, when he found seat 1E – for which he had forked out an additional £27 ($34) – occupied by another passenger. 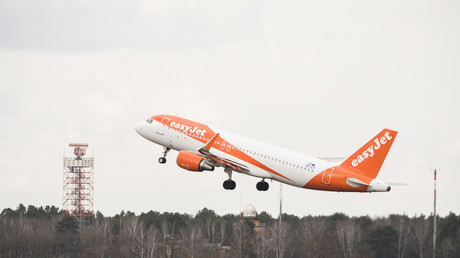 When he boarded the plane at Schipol, he complained after staff placed him in a seat with normal legroom. The former physician told UK tabloid the Sun that after complaining, the captain said: “I don’t like your attitude. You have to get off the plane.”

“Three policemen – I think they were from the anti-terrorist branch – came on with Heckler and Koch machine guns,” he said. “One said to me: ‘Are you going to resist?’ I replied: ‘Do I look as though I am capable?’”

Airline staff claim the father-of-three was violent and abusive. EasyJet claims that the doctor lost his front seat as he made a last-minute flight change, and seat 1E had already been booked.

“After changing Dr Ramsay Smith’s flight at his request, we were unable to assign him the same seat he had selected on his original flight,” the easyJet spokesman said.

“During boarding, he was verbally abusive to crew over being unable to sit in this seat. The captain tried to resolve the issue by offering two other alternative seats, which he rejected. At this point, he physically assaulted the cabin manager and police were called to escort him off the aircraft.”

After flying back the following day, Dr Ramsey Smith added: “I missed a doctor’s appointment because of this. The treatment I received from easyJet was despicable.”

He defended his actions, and insisted that he had booked the front-row seat in question. “I only pushed the flight attendant when she stood on my foot, I was in agony,” he said. “I told the captain his mother would not be proud of him… but I don’t think I was abusive.

The former doctor, who spent a chunk of his career working in war-ravaged Africa for Medicines Sans Frontiers, had been in Amsterdam to see ex-colleagues to plead for help with his rare and excruciating medical condition.