Police officers cannot be held liable for use-of-force consequences even when they provoke a violent confrontation, the Supreme Court has ruled. The case involved a couple that was severely injured by two California officers searching for a wanted man.

On Tuesday, the Supreme Court ruled 8-0 in favor of Los Angeles County, California, and two deputies with the county sheriff’s department. The case stems from a lawsuit against Los Angeles County and the deputies by a couple, Angel and Jennifer Mendez, who were shot repeatedly by the officers on October 1, 2010.

At the time, the Mendezes were living in a shack in the backyard of a Lancaster, California, home where the sheriff’s department believed a wanted parolee-at-large was hiding.

The high court’s decision overturns a “provocation rule,” created by the US Court of Appeals for the Ninth Circuit. The rule says a law enforcement officer can be held liable for an “otherwise defensive use of deadly force” in cases when an officer provokes a violent encounter, but only if the provocation is an “independent Fourth Amendment violation,” according to the Harvard Civil Rights-Civil Liberties Law Review.

The Fourth Amendment of the US Constitution protects against “unreasonable” searches and seizures.

Writing the opinion for the Supreme Court, Justice Samuel Alito said officers cannot be held liable for such excessive force under the Fourth Amendment.

“A different Fourth Amendment violation cannot transform a later, reasonable use of force into an unreasonable seizure,” Alito wrote.

On October 1, 2010, the LA County Sheriff’s Department was seeking parolee-at-large Ronnie O’Dell, who was reportedly spotted at a private residence in Lancaster. Deputies entered the home and also searched the backyard, which included a small shack built by the Mendezes. 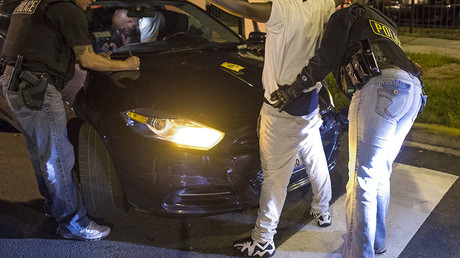 Without announcing themselves and without a warrant, the two deputies, Christopher Conley and Jennifer Pederson, entered the shack, where the Mendezes were napping on a futon. Upon entry, Angel Mendez grabbed a BB gun he used to shoot rats and pests. Believing their lives were then in danger, the deputies fired 15 rounds at the couple, severely injuring both. Angel Mendez had to have his leg amputated immediately, while Jennifer Mendez, who was pregnant, was shot in the back.

The US District Court for the Central District of California ruled that the officers violated the Fourth Amendment with their warrantless, knock-free entry into the shack but acted “reasonably” when they fired, believing their lives were in danger.

The district court ultimately invoked the provocation rule in the case, according to SCOTUSblog, saying the officers and the county should be held liable for the damages because the officers recklessly “provoked” the incident. The Mendezes were awarded $4 million in damages.

The Ninth Circuit then affirmed the district court’s decision.

Alito wrote that, while the provocation rule may have originated out of motivation to hold police accountable for violating the constitution, “there is no need to distort the excessive force inquiry in order to accomplish this objective.”

“To the contrary, both parties accept the principle that plaintiffs can—subject to qualified immunity—generally recover damages that are proximately caused by any Fourth Amendment violation,” Alito said.

The Supreme Court’s ruling will require the Ninth Circuit to review the case in order to establish whether the Mendezes can still recover damages based on the deputies’ warrantless entry.