Nearly all of the cannabis sold on Britain’s streets is now super-strength ‘skunk’, new research reveals. It has prompted experts to warn of a serious risk to mental health that the drug poses.

King’s College London tested almost 1,000 police cannabis seizures from Kent, Derbyshire, Merseyside, Sussex and London in 2016. It found 94 percent were of a drug with a dangerously high potency. The new figures compare unfavorably to 2008, when 85 percent of sinsemilla, or skunk, was being sold on the UK’s illegal market, while they are a significant increase on the 51 percent recorded in 2005.

“In previous research we have shown that regular users of high-potency cannabis carry the highest risk for psychotic disorders, compared to those who have never used cannabis. The increase of high-potency cannabis on the streets poses a significant hazard to users’ mental health, and reduces their ability to choose more benign types,” said Dr. Marta Di Forti, Medical Research Council clinician scientist at King’s College London’s Institute of Psychiatry, Psychology & Neuroscience, Sky reports. 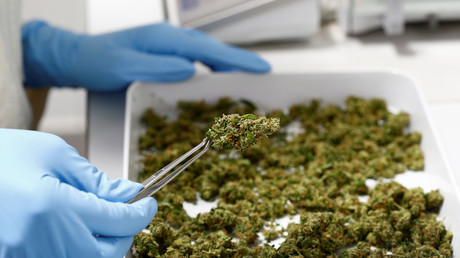 “More attention, effort and funding should be given to public education on the different types of street cannabis and their potential hazards,” said Di Forti. “Public education is the most powerful tool to succeed in primary prevention, as the work done on tobacco use has proven.”

The study, published in the Drug Testing and Analysis journal, also found the samples had a much higher concentration of tetrahydrocannabinol (THC), the psychoactive ingredient in cannabis which gives users the ‘stoned’ feeling, but can also lead to paranoia and hallucinations. The THC content rose from 4 to 6 percent between 2005 and 2016.

“If these seized samples are representative then it suggests that apart from the dominance of skunk in the UK market, it also seems that resin has increased in strength, as this analysis shows that some resin samples were nearly three times stronger than those seized back in 2005. So even if people are trying to source lower potency cannabis they are unable to. If the cannabis market is saturated with higher potency cannabis this increases the risk of younger and more naive users developing problems as they are less likely to adjust the amount of cannabis they ingest than more experienced users,” said Ian Hamilton, Lecturer in Mental Health, University of York, according to the Telegraph.

Cannabis is the most commonly-used illicit drug in the UK, with 6.6 percent of people aged between 16 and 59 indulging in the past year – some 2.2 million people. The prevalence of the drug has led to consistent calls for it to be decriminalized for both medicinal and recreational purposes.

A proposal for cannabis to be partially legalized for medical purposes was supposed to be debated in Parliament last week. The bill proposes to “allow the production, supply, possession and use of cannabis and cannabis resin for medicinal purposes; and for connected purposes.”

MPs, however, faced fierce backlash on Twitter as they were accused of spending so much time on private members’ bills that none was left to discuss the proposal. Social media users, as well as Paul Flynn, one of the MPs calling for the reform to cannabis laws, accused members in the Commons of “filibustering” – or talking for so long that a vote or debate cannot be held.

Surely bills which could save thousands of lives in the UK should be prioritised? This is blatant filibustering, I am so sorry that you have to deal with these kinds of people Paul, we all thank you so much for making our voices heard