The summit between US President Donald Trump and North Korean leader Kim Jong-un “may or may not happen” as scheduled, depending on Kim’s actions in the coming days, Trump said in a meeting with the South Korean president.

Trump and Moon met at the White House on Tuesday to discuss the summit, scheduled for June 12 in Singapore. Both remained optimistic about the meeting, though Trump said he was “not happy” about the recent changes in North Korean attitude.

The tone from Pyongyang changed after Kim’s second meeting with Chinese President Xi Jinping, Trump told reporters prior to the meeting, according to Reuters. He called Xi a “world class poker player” who he would like to think is committed to peace in the Korean peninsula.

“If it doesn’t happen, maybe it will happen later,” Trump said about the summit. “It may not work out for June 12.”

Asked if he would prefer denuclearization over time or all at once, Trump said, “all in one would be nice.”

If Kim follows through on denuclearization, “I will guarantee his safety,” Trump said, adding that leaders of South Korea, China and Japan have told him they would invest large amounts of money to “help make North Korea great.” 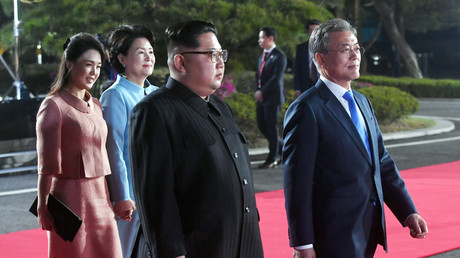 Moon said that Trump has been able to achieve “dramatic positive change” in relations with North Korea. He is confident that Trump will be able to make the upcoming summit successful and “end the Korean war,” he said.

Acknowledging there are voices in the US skeptical about the summit and the prospects of denuclearization, Moon said that the “fate and future” of the Korean Peninsula hinge on it.

Asked about his vision for the Korean peninsula, Trump said he was “looking at having two very successful Koreas” at first, and then it would be “largely up to them” whether to unify down the road.

He described the border between the two Koreas as “artificial” and largely imposed by the US, during the 1950s Korean War.

The Trump-Kim summit was scheduled after a historic meeting between Kim and Moon and Panmunjom in April. However, the North Korean rhetoric escalated after US national security adviser John Bolton brought up the “Libyan model” of denuclearization, with Pyongyang pointing out that Washington led a “regime change” operation in Libya in 2011, after Tripoli surrendered its nuclear research materials to the US in 2003.

Trump distanced himself from Bolton’s remarks last week, but told North Korea that the Libyan model of regime change might ensue if the peace talks fail. The message was later echoed by his vice president Mike Pence.