When Donald Trump speaks at a campaign rally, it’s rarely because he is opening for another charismatic speaker. But that’s what happened in Jackson, Mississippi, when he introduced Nigel Farage, who gave an Americanized Brexit speech.

Farage, who led the United Kingdom Independence Party in its campaign to take the UK out of the European Union, seemed to delight in addressing Trump’s supporters Wednesday night.

Farage repeatedly touched on the themes that drove the United Kingdom to vote in favor of “Brexit,” the June referendum to leave the EU.

Crafting the story to be analogous to the US election, Farage recalled reaching out to those “let down by modern global corporatism,” which drew large cheers.

“People who had never voted in their lives,” Farage noted, went to the polls to “take back control of their borders” and “get back their pride and self respect.” 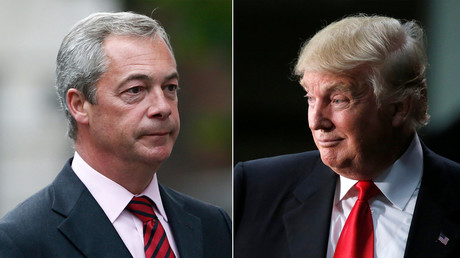 Farage never mentioned Trump by name in his remarks, but he did verbally whack both President Barack Obama and Democratic presidential nominee Hillary Clinton.

Obama “talked down to us,” Farage said, referring to the president’s anti-Brexit remarks given during an April press conference in the UK. Farage promised not to do the same, leaving Trump lacking in a full and complete endorsement.

But for all intents and purposes, what Farage said next might as well have amounted to full-throated support of the billionaire businessman’s candidacy.

“I can’t possibly tell you how you should vote in this election,” Farage declared, “but…but,” he added, teasing the crowd.

In the background, Trump was giving a thumbs-up to the raucous crowd.

Farage reiterated “the parallels” between his own country’s move away from “the establishment” and encouraged the crowd further, telling them they had a “fantastic opportunity with this campaign” to “beat Washington.”