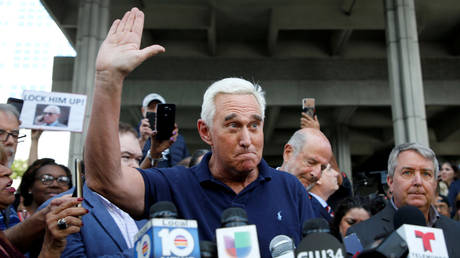 Roger Stone will fight criminal charges against him, and “categorically” denies any wrongdoing. Stone’s arrest, two analysts told RT, has nothing to do with collusion, and everything to do with taking down Trump.

Stone’s lawyer, Grant Smith, has said that his client is “vindicated,” by the fact that the indictment against him does not mention “Russian collusion,” and instead charges him with relatively minor process crimes.


Stone is charged with one count of obstruction, one count of witness tampering, and five counts of making false statements to Congress. Smith claimed that the misstatements his client made were “immaterial” and allegedly due to forgetfulness, and Stone himself told reporters that he intends to plead not guilty.

“This was an investigation about Russian collusion and now they’re charging Roger Stone with lying to Congress about something he honestly forgot about,” Smith continued. “Roger intends to fight these trumped up baseless charges.” Stone allegedly made false statements in an effort to cover up a 2016 claim that he acted as an intermediary between the Trump campaign and WikiLeaks, which had published a trove of Democratic Party emails.

When asked whether he had any contact with Russians in 2016, Stone said “categorically not.”

Stone was arrested by heavily-armed FBI agents in a pre-dawn raid at his Florida home on Friday. A CNN camera crew accompanied the agents to Stone’s door. The veteran political consultant has been released by a Ft. Lauderdale judge on a bond of $250,000, and had his travel restricted.

He told reporters that “there is no circumstance whatsoever under which I will bear false witness against the president.”

Trump’s opponents in political and media circles have suggested that Stone’s arrest brings Mueller one step closer to nailing Trump for the elusive crime of ‘Russian collusion’. Former CIA Director turned anti-Trump MSNBC analyst John Brennan told the network that Stone played his part in an “extensive effort to try to influence the outcome of the election, that involved the Russians,” and went “to the very top of the Trump campaign.”

Stone and his lawyer are not the only ones calling BS on these claims.

Also on rt.com
Roger Stone’s indictment offers more proof of no contacts between him and Julian Assange – WikiLeaks


Jim Jatras, a former US Diplomat and GOP Senate policy adviser, told RT that the indictment shows “no collusion between the Trump campaign and Wikileaks, or the Russians or anyone else.” Instead, the crimes are so-called ‘process crimes’, or crimes that occurred during the course of an investigation.

President Trump has repeatedly accused Mueller’s team of nailing his associates for process crimes, in an effort to sway them into testifying against him.

“This is what they do to put the squeeze on people to try to force them to make up things that aren’t true,” Jatras explained. “What they do is they throw all kinds of complex questions at you and if you don’t have the relevant records, and any time you get a name wrong or a date wrong, they say ‘that’s a felony,’ ‘that’s a felony, and we’re gonna throw you in jail for the next fifty years unless you do what we say.’”

The media had a front row seat for Stone’s dramatic arrest, with a CNN camera crew documenting the raid. While CNN’s Kate Bennett claimed that producer David Shortell “trusted his instincts” and lay in wait outside Stone’s home since 5am, others concluded that either the FBI or someone on Mueller’s team tipped the network off.

It’s possible this tip-off came from FBI rather than Mueller’s office, but either way, nobody should be comfortable having law enforcement engineer with media outlets the filming of someone’s arrest at their home like a reality TV circus. But it’s Roger Stone, so few will care. https://t.co/H7VvltkoCE

“It was an orchestrated show,” Jatras said. “How is it that CNN, which is at the forefront of the lynch mob against Trump and his associates, just happens to be at the scene where the FBI is launching a pre-dawn raid?”

Charging Trump’s associates with a barrage of process crimes, and broadcasting images of heavily armed federal agents raiding Stone’s house are part of an attempt to “create an atmosphere of criminality” around Trump, Jatras said, with the end goal of supporting his impeachment.


The entire ‘Russiagate’ investigation, former Pentagon analyst Michael Maloof told RT, is “a waste of money, and a waste of time” being “perpetuated by the mainstream media, and the democrats in Congress, because they hate Trump period. That’s what this is all about. They just hate Trump.”

The president himself repeated this assertion on Friday, tweeting that the investigation is the “Greatest Witch Hunt in the History of our Country,” and asking “Who alerted CNN to be there?”