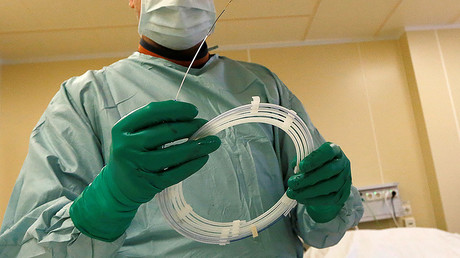 A new study has found that inserting stents into arteries of hundreds of thousands of heart patients each year to relieve chest pain may be a waste of time, and its effectiveness might be due only to the “placebo effect.”

Researchers at the Imperial College London looked at 200 patients in London and the south of England who either received a heart stent or a sham procedure and measured the effect of a stent on how long people could exercise after the procedure before needing to stop.

Those given a stent and the group denied it reported no significant difference in their symptoms, despite stents being shown to improve blood supply to the heart.

The study found the average increase in overall exercise time was 28.4 seconds for patients who had the Percutaneous Coronary Intervention (PCI) procedure.

Those in the study who were given a sham procedure, getting an angiogram using a catheter to examine their arteries but no stent, managed 11.8 seconds. The authors said this is “statistically significant” so could be due to the stent or chance.

Neither patients nor researchers assessing them afterward knew who had received the stent. Following the procedure, both groups of patients took powerful drugs to prevent blood clots.

Around 10 million people in the US have stable angina, which causes chest pain following physical activity because of restricted blood flow to the heart.

The stent revolution began over 40 years ago which inserted stents into patients to improve the symptoms of angina. What was unknown was how much the procedure was a true therapeutic effect, or was due to the “placebo effect” of patients thinking they should feel better after the surgery.

“It seems that the link between opening a narrowing coronary artery and improving symptoms is not as simple as everyone had hoped,” Dr. Rasha Al-Lamee, author of the study, said in a televised interview with Imperial College University. “Surprisingly, even though the stents improved blood supply, they didn’t provide more relief of symptoms compared to drug treatments – at least in this patient group.”

In patients with heart attack problems, opening up a blocked artery with stents is actually life-saving, noted Dr. Al-Lamee. Stable angina is a much milder condition, affecting many people worldwide.

“In a patient population with stable angina we know they usually present to GP clinics or outpatient clinics saying they have chest pain or their out of breath when they exert themselves that goes away as soon as they rest. It was that patient population we were looking to study,” said Dr. Al-Lamee.

Cardiologists told the New York Times that one reason might be that atherosclerosis affects many blood vessels, and stenting only the largest blockage may not make much difference in a patient’s discomfort.

“All cardiology guidelines should be revised,” Dr. David Brown, of Washington University School of Medicine, and Dr. Rita F. Redberg, of the University of California, San Francisco, wrote in an editorial accompanying the new study, published by The Lancet on Wednesday.