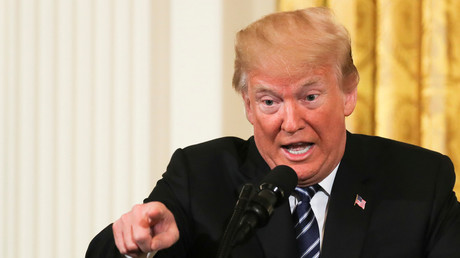 A new persona has been thrust into center stage of Russiagate drama. Stefan Halper, who has a long history of working with the CIA, has been revealed as the man who was charged with keeping tabs on Trump’s election campaign.

The spy controversy that rumbled on for several weeks has reached a dramatic, and peculiar, ending with the revelation that, Cambridge professor, Stefan Halper was sent by the FBI to to scope out two of Donald Trump’s campaign advisers on his 2016 election campaign.

Several Republicans floated allegations that the FBI spied on Trump and the scandal came to a boil on Friday when the president himself tweeted that an informant was “implanted” on his campaign.

Reports are there was indeed at least one FBI representative implanted, for political purposes, into my campaign for president. It took place very early on, and long before the phony Russia Hoax became a “hot” Fake News story. If true – all time biggest political scandal!

On Friday The New York Times and The Washington Post both published stories saying that the FBI had used an informant to get information out of George Papadopoulis and Carter Page.

Lawmakers had been demanding documents about the informant due to concerns that federal investigators were abusing their authority. The calls were met with stubborn refusal from law enforcement officials in the Department of Justice and the FBI who said that it would reveal the identity of the, highly valuable, source and imperil the person’s safety and the safety of others.

The Times’ and the Posts’ stories provided so much detailed information about the informant that it was easy to connect the dots and realize it was Stefan Halper. The Daily Caller had published an article on Thursday reporting that Halper met with Papadopoulos and Page so it was entirely obvious who the two papers were referring to.

The Times’ article said that Trump made his claim without any proof and it asserted that the informant isn’t a spy at all.

I’m puzzled by the argument that the use of an informant taints an investigation. Informants are a ridiculously common part of law enforcement investigations, often at a very early stage.

“In fact, FBI agents sent an informant to talk to two campaign advisers only after they received evidence that the pair had suspicious contacts linked to Russia during the campaign,” the report reads, making sure it apportioned Russia its share of blame.

The papers’ curious behaviour prompted many people to wonder about their actions. Journalist Glenn Greenwald said: “These outlets are purposely publishing enough information about this “informant” for anyone to know who it is, while pretending to believe the FBI’s claim that identifying him will put him in danger. It’s the weirdest behavior: afraid to openly defy the FBI while coyly doing it.”

Halper was subsequently named by The Daily Caller and The Intercept confirming what many people already knew.

So who is he and what’s his history?

It turns out Halper has a very interesting backstory, serving as a White House official in the Nixon, Ford, and Reagan administrations. The academic has long established links to the CIA and MI6 and was even embroiled in a spying fiasco during the 1980s that involved two presidents.

The alleged spy placed in Trump campaign has been revealed, although there is no confirmation yet. The suspected spy, Stefan Halper, was paid nearly $300,000 by the Obama administration & is believed to have been placed there by Obama, Clapper & Brennan.https://t.co/sru5WG9gbY

Though he doesn’t have a very high public profile, at least before now, he is well known in foreign policy circles. Information on some of his links to the CIA and and British intelligence service is already in the public domain.

During the 1980 election he was in charge of a group of CIA operatives who were tasked by the Reagan campaign with spying on the Carter administration.

The spies, who were embedded deep in the White House, passed classified information about Carter’s foreign policy to Reagan campaign officials. They were reportedly under the direction of former CIA Director, and then Vice-Presidential candidate, George H.W. Bush.

The Intercept note that the fact that his work with the CIA was in the public domain entirely undermines the FBI’s claim that he was a top-secret asset whose exposure would endanger his life and the lives of others.