Donald Trump and Theresa May are struggling to keep their handholding relationship special. This time they’re bickering over proposed steel taxes, adding to a growing feeling that a conscious uncoupling may lie ahead.

Insiders have revealed that the British PM was forced to confront US President Donald Trump again, after POTUS revealed plans to impose tariffs on metals imports. The Donald wants to add a tax of 25 percent on imported steel, and 10 percent on aluminum to save the flailing US industry.

Trump also said that, if the EU retaliated over the proposed tariffs, the US would put a tax on cars made in the European Union. Insiders say UK PM Theresa May expressed her fears over the proposed taxes (and subsequent threat) to him by telephone yesterday afternoon. “The prime minister raised our deep concern at the president’s forthcoming announcement on steel and aluminum tariffs, noting that multilateral action was the only way to resolve the problem of global overcapacity in all parties’ interests,” a spokeswoman said. 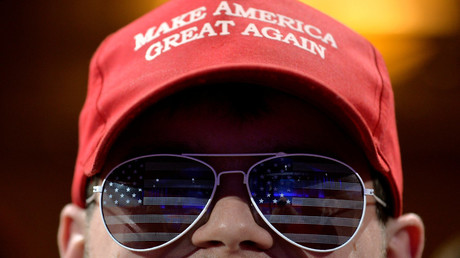 This isn’t the first time that May and Trump have disagreed. In recent months, Trump’s canceled state visit to the United Kingdom symbolized the deterioration of the previously unbreakable UK-US special relationship. Under the guise of issues with the new US embassy in London, Trump snubbed May’s offer of a state visit.

The President claimed to disapprove of a deal to sell the old US diplomatic headquarters in London’s Grosvenor Square. According to insiders, May’s offer included a banquet and an invitation for him and the first lady to stay at Buckingham Palace in an effort to “appeal to Trump’s vanity.”

Citing senior current and former government officials as sources, Bloomberg News reported that phone calls between Trump and May have since headed south. They said that May now “finds it impossible to make headway and get her points across. Trump totally dominates the discussion, leaving the prime minister with five or 10 seconds to speak before he interrupts and launches into another monologue,” the insider told Bloomberg.

The US president – in his usual form – has also been unafraid to take swipes at Theresa May on Twitter (albeit the wrong Theresa May). Trump hit back at the person he thought was Britain’s leader when the UK PM condemned his retweeting of anti-Islamic videos that were initially shared by Jayda Fransen, deputy leader of the far-right political group Britain First. In reality, he tweet-attacked an innocent woman from Suffolk with only six followers, who also unfortunately had the name Theresa May. The tweet was deleted 14 minutes later by the US president, before being reposted, tagging the right Theresa May.

According to anonymous sources cited by the Daily Mail, Trump complained to May about criticism he has faced in the British media. He told May in one phone call that he “would not be coming to the UK until she could promise him a warm welcome,” amid threats that the president would face mass street protests upon his visit.

The UK PM allegedly told the Donald that this was simply how the British press works, with shocked advisers listening to the call in a secure bunker from beneath Number 10. Sources say May’s staffers were “in astonishment at Trump’s demand.”