There is a risk of powerful explosions at Kilauea volcano, that may shower the area with giant boulders, toxic fumes and ash, the USGS warned. The ongoing eruption has already forced hundreds of residents out of their homes.

With lava continuing to pour from the Kilauea crater, there is a growing chance that its level will go below that of groundwater, which, in turn, will trigger a chain of steam-driven explosions when the two substances mix, the US Geological Survey warned. The explosions could strike Hawaii’s Big Island virtually any minute, as long as the Kilauea volcano, which has been erupting since last Thursday, is active, the geologists said.

The USCG says they are unable to predict the duration and impact of the explosions and whether they are imminent, as these kinds of natural events “provide very little warning.” 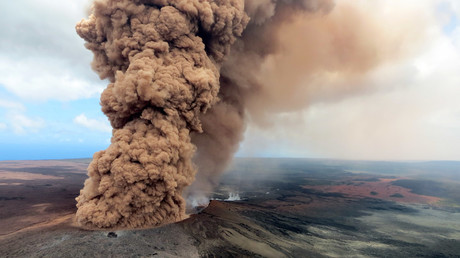 In case the explosions begin, the area may face a mini-apocalypse, with boulders weighing up to several tons and measuring up to two meters (yards) in diameter dropping from the skies within one kilometer (0.6 miles) from the volcano or even farther away.

In addition, ash clouds can spread over “much wider areas” than before, covering “up to several tens of miles” from the volcano, the USGS said, reminding of the historic 1924 eruption, when some 50 explosive events over two and a half weeks saw rocks weighing as much as 14 tons being thrown in the air. That eruption remains the most powerful at Kilauea since the early 19th century.

Another cause of concern is sulfur dioxide, which can cause coughing, a burning sensation in the throat and can even be fatal in large dosages. While the gas that would be emitted in the explosions will mainly consist of steam, it would also contain the hazardous dioxide, the geologists warned.

It is unclear how long it will be until this doomsday scenario could be realized, since the researchers stopped monitoring the levels of lava after May 6 due to the thickening toxic fumes and increasing depth of the lava pond. 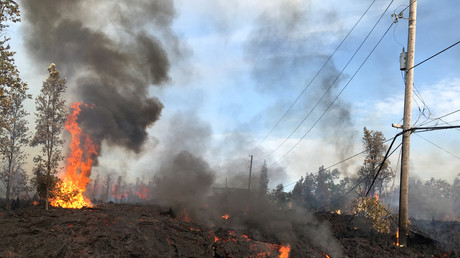 Kilauea, which is one of the planet’s most active volcanoes, has driven almost 2,000 people out of their homes with the latest explosion and dismantled 36 structures, including 26 homes. The residents of Lanipuna Gardens and Leilani Estates were ordered to immediately evacuate, with police in Leilani Estates going door-to-door on Tuesday to persuade the remaining residents to flee the precarious neighborhood.

A total of 14 new fissures have appeared on the Big Island since the eruption began, with two new vents opening on Tuesday. The same day, authorities issued a cell-phone alert in Lanipuna Gardens, urging residents that are reluctant to part with their belongings and pets, to vacate the area.

While the volcano has been erupting continuously since 1983, its previous activity had mostly been limited to remote parts of the island and the coastline.