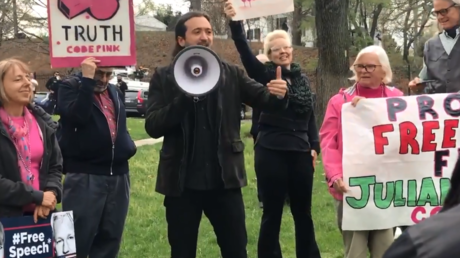 Lee Camp has unloaded on mainstream media in a fiery speech in the defense of the evicted WikiLeaks co-founder. He charged that by staying silent they put a nail in the coffin of press freedom they themselves used to enjoy.

The host of Redacted Tonight addressed a crowd of protesters outside the UK Embassy in Washington, DC.

The journalist argued that Assange’s methods were no different from those of established media like the Washington Post and the New York Times, when they published the Pentagon Papers exposing the truth about the US role in Vietnam, including its involvement in possible war crimes.

“This is nothing new,” Camp said of WikiLeaks’ way of dumping secretive government cables, while keeping sources anonymous.

He said various media outlets, no matter their political leanings, should unite in protecting Assange and thereby their own right to report the facts the government would not like to see unearthed.

“It’s up to our mainstream media, our regular media, our independent media, citizen journalists to stand up and say: ‘This is not how it should be. You should not be in prison for this.'”