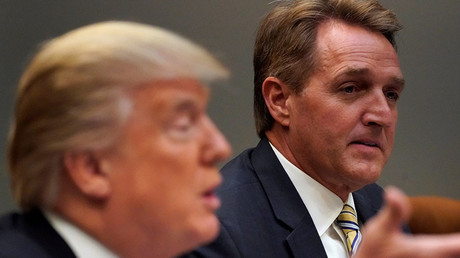 Pre-released segments of an upcoming speech by Republican Senator Jeff Flake, in which the frequent Trump critic compares the US President’s words to those of communist leader Joseph Stalin, have gone viral on social media.

“‘The enemy of the people,’ was what the president of the United States called the free press in 2017,” the statement said.

“Mr President, it is a testament to the condition of our democracy that our own president uses words infamously spoken by Joseph Stalin to describe his enemies. It bears noting that so fraught with malice was the phrase ‘enemy of the people,’ that even Nikita Khrushchev forbade its use, telling the Soviet Communist Party that the phrase had been introduced by Stalin for the purpose of ‘annihilating such individuals’ who disagreed with the supreme leader,” it said later.

Senator Flake is due to make the comments in a speech on the Senate floor on Wednesday. On the same day, Trump will be handing out “Fake News Awards” to news outlets he thinks are covering him unfairly.

“Well he borrowed that phrase. It was popularized by Joseph Stalin, used by Mao as well, ‘enemy of the people,’” Senator Flake told MSNBC on Sunday. “It should be noted that Nikita Khrushchev, who followed Stalin, forbade its use saying that it was too loaded. That it maligned a whole group or class of people, and it shouldn’t be done.”

“I don’t think we should be using a phrase that had been rejected as too loaded by a Soviet dictator.”

On February 17, 2017, Trump tweeted his belief that the US news media “is the enemy of the American people,” and has often referred to the media as an “opposition party” to his administration. He has blamed news organizations for stymieing his agenda.

The Twittersphere was quick to point out Flake’s hypocrisy for criticizing Trump while continuing to work with him.

.@JeffFlake has become very adept at getting free airtime and media praise by throwing rocks at Trump from waaay across the street, then picking them up himself and politely asking if there’s anything else Mr. Trump would like him to vote for. https://t.co/dlwpOhF7nu

When Flake compares Trump to Stalin, of course he knows Trump hasn’t killed 20 million people, yet.
He’s only talking about the attacks Trump has made on our free and real press.
But Magats choose not to get the real meaning here, and to use the ridiculous comparison model.
Sad. pic.twitter.com/3KgZ9mbfpT

Flake recently said Trump’s attack on the news media damages the country’s standing in the world and empowers dictators everywhere. The lawmaker was elected to the Senate in 2012, boycotted the Republican National Convention, wrote a book denouncing the president, criticized him from the Senate floor in October, and announced last November he would not seek a second term this November.

After delivering a speech in the lawmakers’ home state in August, Trump tweeted that he was “not a fan of Flake.”

Phoenix crowd last night was amazing – a packed house. I love the Great State of Arizona. Not a fan of Jeff Flake, weak on crime & border!

In the interview with MSNBC, Flake said he has not ruled out challenging Trump in the Republican primary in 2020.

“What I am trying to do with this speech is nudge the presidency to where he should be,” Flake told MSNBC. “I am not the only the Republican who is saying ‘I am sure this is my party.’ We used to stand for limited government, free trade, free enterprise, and not this kind of nationalist protectionist, kind of party. I am not the only.”

When asked if he would rule out challenging the president in 2020, he said: “No I won’t rule it out.”

Trump will “certainly” have a challenge from an independent candidate, and will “likely” have a Republican primary challenger.