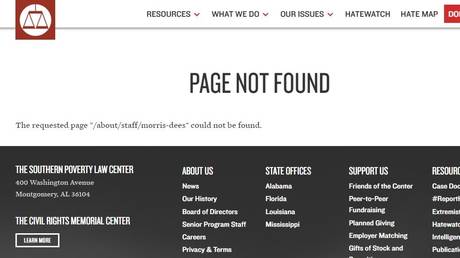 The Southern Poverty Law Center has fired its founder Morris Dees for unspecified reasons, purging all mentions of him from its website. The organization is also seeking external review of its “climate” and business practices.

The Montgomery, Alabama-based organization announced on Thursday that its dismissal of Dees was effective as of March 13.

“As a civil rights organization, the SPLC is committed to ensuring that the conduct of our staff reflects the mission of the organization and the values we hope to instill in the world,” the group’s president Richard Cohen said in a statement. “When one of our own fails to meet those standards, no matter his or her role in the organization, we take it seriously and must take appropriate action.”

Cohen did not offer any further specifics for the dismissal of Dees, the lawyer who was one of the founders of the SPLC back in 1971. A search for Dees on the SPLC website returned a “page not found” on Thursday.

The SPLC started out as a civil rights nonprofit dedicated to the plight of African-Americans in Alabama, but grew into a fundraising behemoth with over $450 million in net assets by 2017. It is now primarily known as the group behind Hatewatch, a blog listing “hate groups” that is often uncritically embraced by media and social networks.

The practice came under some scrutiny in 2012, after a man attempted to carry out a mass shooting at the Washington, DC offices of Family Research Council, saying he found them on the SPLC list of “anti-gay hate groups.” The SPLC condemned the attack but persisted in calling the FRC a “hate group.”

That’s not the worst of the SPLC, they have incited a mass shooting, the terrorist pled guilty and explained how he was inspired by the SPLC.https://t.co/iDLSbVEm8N

Last year, the SPLC had to pay over $3 million and apologize to the Quilliam Foundation and its founder Maajid Nawaz, who sued after they were labeled “anti-Muslim extremists” in a SPLC “manual” for journalists.

In a series of articles nominated for the Pulitzer Prize in 1994, the Montgomery Advertiser examined the SPLC and its “multimillionaire” boss. Among the allegations in the series – denied by SPLC – was that black employees felt threatened by Dees and accused him of “being a racist.”

As of Thursday afternoon, there was no official explanation why Dees was purged from the SPLC, with Cohen’s statement providing only hints by saying the SPLC would be “bringing in an outside organization to conduct a comprehensive assessment of our internal climate and workplace practices, to ensure that our talented staff is working in the environment that they deserve — one in which all voices are heard and all staff members are respected.”

The group was showing no signs of halting its social media crusade against “hate groups,” tweeting on Thursday a link to the March 12 Mother Jones story, featuring Hatewatch publisher Heidi Beirich and taking aim at Amazon and Facebook.

“Keeping hate groups from having money keeps them from being able to do the terrible things that they want to do. The money aspect of it is by far of the most important. It’s their lifeblood.” — SPLC’s Heidi Beirich https://t.co/t9IIv5jzI7