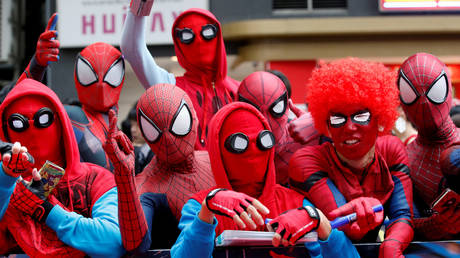 The poster and trailer for the new Spiderman film, ‘Far From Home,’ were released on Tuesday, the same day the House of Commons voted on the draft Brexit deal. Coincidence? Many online theorists think not.

Prime Minister Theresa May’s Brexit plan was defeated by a historic margin in the vote, sending the Tories scrambling for a plan B. Meanwhile, as beleaguered Britons face the prospect of an even more drawn-out Brexit process (or not, as it may turn out) any opportunity for a bit of distraction from the whole political mess is welcome.


This may have led to the latest online theory, which claims that the trailer for the new Spiderman film, set predominantly in Europe, was strategically released on the same day as the British parliamentary vote.

Throwing the old causation versus correlation bit out the window, superhero fans took to wanton speculation as to the potential for political messaging embedded within the new Spiderman trailer. See if you can spot it.

Fans may have been reading into the imagery and symbolism of the trailer a little too much, but can be forgiven in light of the relentless coverage of arguably the most tedious divorce in political history.

my twitter trends is like spider-man defeated theresa may’s evil plan. Was brexit an illusion made by mysterio all along

judging from the state of England in the Spider-man: Far from home trailer, it’s safe to say that Brexit is moving along in the MCU.