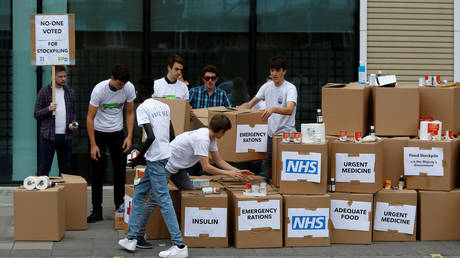 A team of highly-trained British military personnel, located in no less than a “nuclear-proof bunker” under the UK Ministry of Defence, have been “activated” to prepare for a doomsday no-deal Brexit scenario.

Who said leaving the EU would be easy?

Operation Redfold, as it has been dubbed, will see 3,500 military personnel put on standby as Her Majesty’s Government prepares to enter “very high readiness mode” for the dreaded no-deal scenario, Sky News has revealed.

The bunker, called “Pindar” is located deep under the Defence Ministry and is used only at a time of war or outright national emergency. Enter Brexit.

Also on rt.com
EU offers Brexit delay until May 22 only – leaked draft


With the March 29 exit date fast approaching and no deal yet on the horizon, control of Brexit-related planning will shift next week from the Cabinet Office to the government’s “Cobra” emergency committee. This will involve near 24-hour manning of departments most at risk from Brexit-related disruptions, such as the health, transport and defence portfolios.

Special teams will be “primed to divert resources or deploy manpower where required,” a government insider told Sky.


But that’s not all. From Monday, military troops will be ready for deployment at a day’s notice if a no-deal exit becomes reality and Theresa May’s government fails to avert disaster before next Friday – and, in fairness, given how things have been going, there’s hardly good reason to assume she’ll manage it.

Troops may be used to help transport food, fuel and other products around the country. A team of 200 has been prepped to drive fuel tankers to petrol stations, if necessary. Military bases might also be forced to open their gates to allow lorries and trucks backed up at ports to park, if there are major border delays.

Operation Redfold is the “military dimension” of the cross-Whitehall no-deal contingency preparations which are known as Operation Yellowhammer, the Sky report said.

It’s not the first time Britons have been issued with dire Brexit-related warnings. The government has already warned people about the potential need to stockpile food and medicine, with fears that civil unrest could take hold and that the pound would crash if the UK itself crashes out of the EU without a withdrawal agreement in place.

One German-owned company even hoarded 600 tonsof toilet paper in its UK warehouses to avoid disruption to supplies.