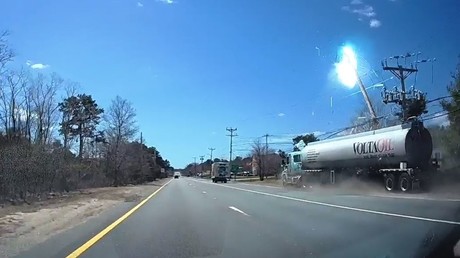 US police have released footage of the moment a truck laden with 12,000 gallons (45,000 liters) of fuel smashed into power lines, causing sparks to fly.The driver has blamed the collision on a freak bird encounter.

The bizarre incident, which investigators at the Bourne Police Department in Massachusetts say could have been far worse, occurred along a stretch of road between Lewisville and Carrollton.

Footage released Tuesday shows how the 10-wheeler lorry, carrying thousands of gallons of flammable fuel, suddenly drifted off a busy road and into an electrical power pole.

The impact caused the power lines to shed sparks which almost reigned down on the vehicle. According to local law enforcement, the driver of the vehicle said he lost control after a bird flew into the cab and struck him on the head.

However, investigators have been unable to verify the claim and the man has been charged with dangerous driving.

“After viewing this very high quality dash cam taken by another motorist, officers were unable to confirm the operator’s account of the accident, observing the vehicle did not swerve and instead slowly travelled across multiple lanes without breaking,” a police statement read.

“The operator was cited for failure to stay within marked lanes and negligent operation of a motor vehicle.”