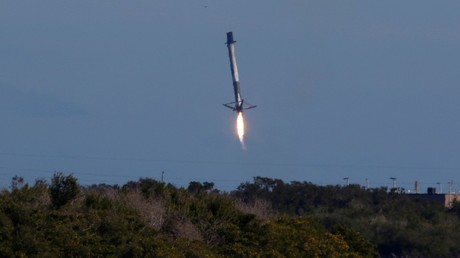 SpaceX’s Falcon 9 rocket failed to stick the landing after successfully launching a supply pod to the International Space Station. CEO Elon Musk says the livestream should not have cut away from the failure.

The CRS-16 mission launched supplies to the ISS on Wednesday, but the booster headed for the landing pad missed and landed in the water instead, ending SpaceX’s perfect record of 12 previous successful landings.

Musk also tweeted a video from on board the booster, showing the rocket spinning uncontrollably until it regained stability at the last moment, but missed the landing pad.

There was a problem with the grid fin hydraulic pump, he explained, so the rocket landed in the sea. It appeared to be undamaged and was transmitting data, Musk said, adding that a recovery ship was sent to retrieve it.

Some space-watchers griped about SpaceX cutting away from the botched landing in their live-stream of the event. Musk admitted that was a mistake, and vowed to “show all footage, good or bad.”

Come on people, we know it’s still difficult to land the rockets. We watch because we are interested to see what happens, good or bad. Cutting away was lame.

Yes, cutaway was a mistake. We will show all footage, good or bad.

Falcon 9 is currently the only reusable rocket booster, which is a major selling point for SpaceX. The first-stage rockets have a 84 percent recovery rate, according to the company. It is unknown, however, whether this particular rocket will be certified for another launch, due to possible damage from contact with salt water.

The US military described Wednesday’s mission as “a successful launch but a non-nominal landing.”

Today’s CRS-16 mission saw a successful launch but a
non-nominal landing. At this time, there are no public safety or health risks
posed and the recovery of the booster is underway. We appreciate all public
cooperation while the recovery is completed.

Musk has the Pentagon beat when it comes to euphemisms, though. He once famously described the disastrous crash of an early Falcon 9 booster as “rapid unscheduled disassembly.”