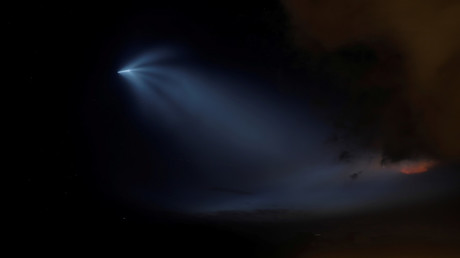 Residents across California were dumbfounded and awe-struck Sunday night as a strange object ignited the night sky. While many people’s first instinct was to think aliens were en route, it was, in fact, a SpaceX rocket launch.

Despite repeated warnings during the week in the build-up to the launch, it appears many residents in California didn’t get the memo.

I saw that here in Fresno Ca ., it totally freaked me out at first tho lol😳😆

In fact, according to Google trends, quite a lot of people in the tri-state area in California, New Mexico, and Arizona were concerned about ET making an appearance Sunday night.

“Local residents may see the first stage of the Falcon 9 returning to Vandenberg AFB, including multiple engine burns associated with the landing,” The Air Force said in a statement last Tuesday. “During the landing attempt residents from Santa Barbara, Ventura and San Luis Obispo counties may hear one or more sonic booms.”

“Sonic boom warning. This won’t be subtle,” SpaceX founder and CEO Elon Musk tweeted on Saturday ahead of the launch.

What you’re looking at is the first launch and landing of the @SpaceX Falcon 9 rocket on the West Coast. The rocket took off from Vandenberg Air Force Base at 7:21 p.m. and landed safely back on Earth. 🚀 pic.twitter.com/8AKjGptpps

The event marked the company’s first West Coast landing on dry land. All previous landings were made on the company’s drone ship, Just Read The Instructions. Land-based booster recovery requires more fuel to make it back to dry land.

SpaceX launches of larger payloads use more fuel, so typically touch down on the drone ships at sea, though landings on solid ground reduce turnaround times for the booster rockets. It was the 30th successful landing for SpaceX out of 62 total launches and the 12th on land.

The mission launched Argentina’s newest Earth-observing satellite, SAOCOMM-1A, which will be used to track natural disasters like floods, wildfires, and oil spills from a low-earth orbit of 385 miles (620km).

The Falcon 9 first stage booster landed in the center of LZ-4, SpaceX’s landing pad at Vandenburg Air Force Base. The booster first saw action back in July, delivering 10 Iridium NEXT communications satellites into orbit.