The US federal aviation watchdog has issued a license for Virgin Galactic’s SpaceShipTwo, allowing the company to restart test flights for the plane designed to take passengers on sub-orbital space trips following the fatal 2014 crash.

The US Federal Aviation Administration’s Office of Commercial Space Transportation (FAA-AST) granted the operator license to Virgin Galactic almost two years after the failed test of the SpaceShipTwo craft, which broke up in-flight and crashed in the Mojave desert in October 2014. The new SpaceShipTwo spacecraft, branded VSS Unity, was unveiled in February this year and is currently undergoing ground system integration testing.

“The license award, which will ultimately permit commercial operations of the vehicle, was the culmination of several years of in-depth interaction with the FAA,” the company said in a statement. “The license review process consists of an in-depth review of the vehicles system design, safety analysis, and flight trajectory analysis, culminating in FAA-AST approval.” 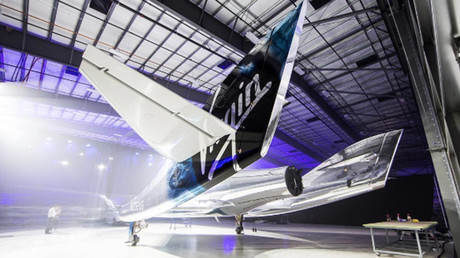 Unlike most spacecraft that leave Earth using a vertically ascending rocket booster, SpaceShipTwo, just like its predecessor, is instead launched from underneath a carrier aircraft, known as the WhiteKnightTwo. Once the WhiteKnightTwo reaches an altitude of 15,000 meters (50,000 ft), SpaceShipTwo then separates from the mother ship and deploys the hybrid rocket engine to reach 4,200 km/h (2,600 mph) speed enough to obtain the needed altitude of some 68 miles (110 kilometers) after 70 seconds.

Once in the lower thermosphere, the SpaceShipTwo is designed to linger in space for a few minutes for tourists to experience weightlessness before shifting the vehicles wings positions to take the crew back to Earth.

SpaceShipTwo, manufactured by the Spaceship Company, Virgin Galactic’s manufacturing arm, is made to be reusable and comfortably carry as many as six people and two pilots into space.

“The granting of our operator license is an important milestone for Virgin Galactic, as is our first taxi test for our new spaceship. While we still have much work ahead to fully test this spaceship in flight, I am confident that our world-class team is up to the challenge,” said Virgin Galactic Senior Vice President of Operations Mike Moses.