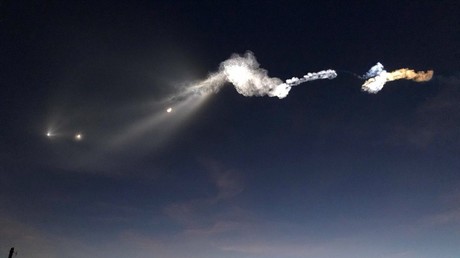 Debris believed to have come from a space communications program has crashed down at a walnut farm in California, with investigators working on the idea that it came from a recently decayed satellite launched in the 1990s.

When charred metal fragments were found by an orchard owner in Hanford, investigators from Kings County Police Department dispatched to the scene were puzzled. Then they turned their attentions to a nearby airbase.

According to local news outlets, the chunk of metal – resembling a burned helmet – was confirmed to be a fuel tank by authorities at Vandenberg Air Force Base. The facility has played host to the launch of SpaceX Falcon 9 rockets.

However, the debris is not from the Elon Musk-founded space company. In fact, the fuel tank dates back to an Iridium satellite sent into space as long ago as 1998, reported Kron 4 news.

A spokesperson for the communications company said the remains appear to have come from Iridium 70, a decommissioned satellite whose parts may still make up some of the millions of pieces of manmade trash found swirling around our planet in space.

The debris is due to be sent to Iridium headquarters for analysis.

Iridium is currently undergoing an overhaul of its space network and has now successfully sent seven of an eight NEXT satellite constellation into orbit via SpaceX’s Falcon 9 rocket. The low-Earth orbit satellites are used for broadband as well as real-time aircraft surveillance, and the final Iridium Next satellite is due to be launched this December.

RT.com has reached out to Iridium and to Kings County Sheriff’s Department for further comment.