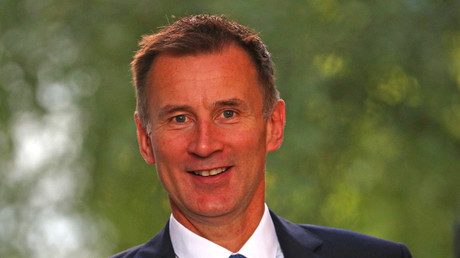 Foreign Secretary Jeremy Hunt’s controversial Tory party conference speech, in which he compared the EU to the Soviet Union, is the only ministerial speech not available on the Conservative Party’s archives.

The speech’s lack of availability comes amid renewed criticism of Hunt’s attack.

German politician Manfred Weber, a leader of the European People’s Party, the main center-right grouping in the European Parliament, demanded that Hunt apologize. “Now we experience a new level of populism when the foreign minister of Great Britain, Hunt, is comparing the European Union with the Soviet Union,” Weber said.

Weber added: “So, Sikorski is right. Mr Hunt, you should apologize for what you have said.”

Hunt, seen as a safe pair of hands in the Foreign Office compared to his predecessor Boris Johnson, courted controversy on Sunday, when he said in Birmingham: “What happened to the confidence and ideals of the European dream? The EU was set up to protect freedom. It was the Soviet Union that stopped people leaving.

“The lesson from history is clear: if you turn the EU club into a prison, the desire to get out won’t diminish it will grow – and we won’t be the only prisoner that will want to escape.”

Despite Hunt’s claims that he had been misquoted, the comment was seized upon by EU leaders. The EP’s Brexit coordinator, Guy Verhofstadt, labeled Hunt’s remarks as “offensive and outrageous.”

Ex-prime ministers Winston Churchill and Margaret Thatcher, “those great defenders of European freedom and democracy, must be turning in their graves,” he added.

Defending his speech, Hunt told CNBC that it “was a passionate request and desire for friendship with our European neighbors.” Attempting to clarify his comments, Hunt said: “But what I was saying is if the attitude of the EU is that someone that wants to leave the club has to be punished, then that’s not consistent with European ideals.”

Prime Minister Theresa May, whose government is hopeful of securing a trade deal with the EU in November, distanced herself from the comparison, stating that the EU contained countries that were once in the Soviet Union and that “the two organizations are not the same.”

RT has contacted the Conservative Party for comment but has not received a response at the time of publication.