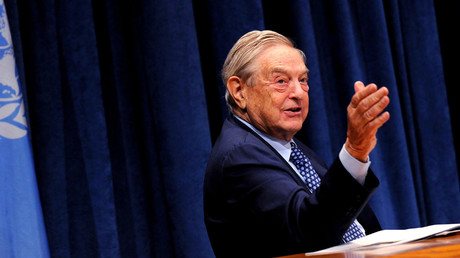 “This is our moment to stand up to protect our democracy. Let’s mobilize to show that we won’t let Donald Trump become the authoritarian that he aspires to be,” MoveOn.org said on its website about the protests. “The law applies to all of us, and it’s essential that it also applies to the most powerful people in our country.”

The organizer said firing the special counsel “would be a constitutional crisis for our country” and would “demand an immediate and unequivocal response to show that we will not tolerate abuse of power from Donald Trump.”

While MoveOn.org is primarily funded by small-dollar contributions from its millions of members, major contributors in the past included financier George Soros and Peter B Lewis, chief executive of Progressive Corp. Soros gave $1.46 million to the group’s Voter Fund during the 2004 election cycle.

After returning from the White House from Camp David on Sunday, Trump was asked by reporters if he was considering dismissing the special counsel, after it was revealed Mueller had obtained access to thousands of emails exchanged by officials of Trump’s transition team.

Mueller was appointed by the Justice Department’s Deputy Director Rod Rosenstein in May to oversee the investigation into alleged Russian meddling in the 2016 election and possible ties of Trump’s campaign associates to Russia.

In October, Mueller indicted Trump’s former campaign manager Paul Manafort and his business associate Rick Gates for several counts of tax fraud and conspiracy. The charges have nothing to do with Manafort’s campaign work, but involve his lobbying work for the Ukrainian government.

Earlier this month, Trump’s former National Security Adviser Michael Flynn pleaded guilty to lying to FBI agents about the content of his conversations with the Russian ambassador six weeks after the election.

The emails in question were provided to Mueller’s team in September, in response to requests from the FBI, but the transition team didn’t learn about it until last week, Langhofer said in a letter sent to the House Oversight and Senate Homeland Security committees, calling the disclosure “unauthorized.” A copy of the letter was obtained by the AP.

Rep. Elijah Cummings (D-Maryland), the ranking member on the House Oversight and Government Reform committee, dismissed the transition’s arguments that GSA shouldn’t have turned over the records.

President Trump has repeatedly insisted that he has no plans to fire Mueller. That hasn’t stopped elected officials such as Representative Jackie Speier (D-California), who claimed on KQED on Friday that Republicans are trying to shut down the House Intelligence Committee’s probe into alleged Russian interference in the 2016 elections.

“I believe the President wants all of this shut down,” Speier said when asked if she believe House Republicans were bowing to pressure from the White House. “The rumor on the Hill when I left yesterday was that the president was going to make significant speech at the end of the next week. And on December 22, when we are out of DC, he was going to fire Robert Mueller.”

Speier said if Trump did that, it “would cause a constitutional crisis,” and “without a doubt there would be an impeachment effort.”

A spokeswoman for Speier said the congresswoman shared the rumor to put pressure on Trump not to fire Mueller.